Asserting that the ball is in the Centre's court, protesting farmer unions on Wednesday asked it to come up with a new concrete proposal for resumption of talks, even as Agriculture Minister Narendra Singh Tomar underscored that dialogue was the only way for a solution and the government was committed to reforms in the farm sector. 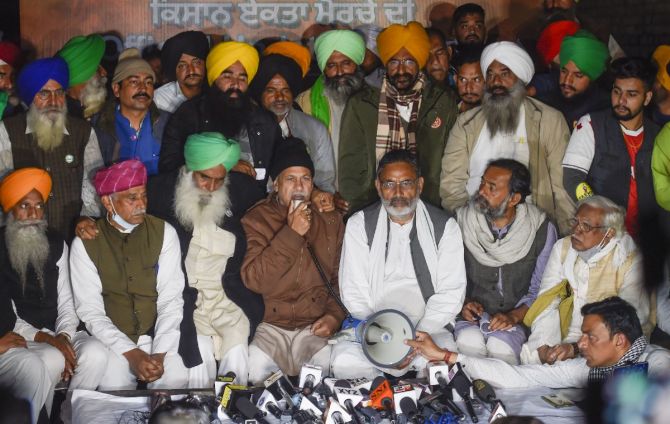 As the stalemate between the government and the protesters, who are demanding a repeal of the three new agri laws, continued without any signs of a breakthrough, Prime Minister Narendra Modi is set to interact on Friday with farmers from six states during which they will share their experience on various initiatives taken by the Centre, in yet another outreach attempt.

Replying to the Centre's offer for talks, the farmer leaders, who have rejected a proposal for amending the agri laws, said that they are waiting for the government to come to the table 'with an open mind', adding if it 'takes one step, farmers will take two'.

It was 'Kisan Diwas' (National Farmers' Day), the birth anniversary of former prime minister Chaudhary Charan Singh, on Wednesday and opposition parties like the Congress, Trinamool Congress, Shiv Sena, and the Left used the occasion to target the government, alleging that it was only interested in benefiting the corporates while the farmers were forced to stage protests on streets.

The Bharatiya Janata Party hit back, alleging that the farmers were being misled and provoked by the opposition parties which had exploited them when in power.

The government reiterated its commitment to the welfare of farmers and expressed the hope that the unions will withdraw their agitation.

'Some farmers have been agitating due to the farm laws. The government has been talking to them with the utmost sensitivity. I hope they will soon withdraw their agitation,' he said.

From a 'yagna' in Sambhal, Uttar Pradesh to pray for the government's 'change of heart' on the agri laws to a letter purportedly written in blood by Bharatiya Kisan Union (Lok Shakti) chief Sheoraj Singh to Prime Minister Modi, various organisations and activists continued to express solidarity with the farmers who have been camping on Delhi's borders since November 26 demanding a repeal of the laws.

"We urge you (government) not to repeat those meaningless amendments that we have already rejected but come up with a concrete proposal in writing that can become an agenda for fresh talks," Swaraj Abhiyan leader Yogendra Yadav said while reading out at a press conference the reply sent by the unions to the Centre's letter dated December 20.

He said the government should stop writing 'love letters' and instead come up with a 'concrete' offer in writing for the talks.

After a meeting of union leaders that lasted for over three hours, farmer leader Shiv Kumar Kakka told reporters that the government should 'abandon its stubbornness' and create a conducive environment for talks.

In the reply to Union Agriculture Joint Secretary Vivek Aggarwal, Sankyukt Kisan Morcha, an umbrella body of 40 agitating unions, alleged that the government is treating the farmers as its 'political opponents'.

"Farmer unions are ready to hold talks with the government and that they are waiting for the government to come to the table with an open mind," said Yadav, who is also a member of Morcha.

He alleged that government wants to project that the farmers are not ready to hold talks, and added that the ball is in the government's court as peasants are ready for the same, but only after a concrete proposal.

In the letter to 40 union leaders, Joint Secretary Aggarwal had on Sunday asked protesting farmer leaders to specify their concerns over its earlier proposal of amendments in the laws and choose a convenient date for the next round of talks so that the ongoing agitation could end at the earliest.

The sixth round of talks on December 9 was cancelled following a deadlock with the farmer unions refusing to budge from their demand for repealing the three laws.

Several farmers visited 'Kisan Ghat' here on Wednesday morning to pay tributes to Chaudhary Charan Singh, who was known for his farmer-friendly policies.

To mark Kisan Diwas, protesting organisations urged people to skip a meal to express solidarity with their agitation.

Earlier in the day, Agriculture Minister Narendra Singh Tomar said the government will continue with reforms in the farm sector as it is committed to strengthening it.

Stressing that a solution can be reached only through dialogue, Tomar said, "History is witness to this fact. However old and strong the protest is, the end and the solution to a protest are reached through dialogue only."

Farmer unions should discuss the government's draft proposal and inform them if they want to add or delete anything, he said.

"I am fully hopeful that our farmer unions will discuss... If they give a date and time, the government is ready for the next round of talks... I am hopeful that we will move towards resolving the issue," Tomar told reporters.

Senior Congress leader P Chidambaram asked the government to shed its 'inflexible position' and heed the Supreme Court's suggestion by keeping the three farm laws in abeyance and bring new ones in their place.

Nationalist Congress Party chief Sharad Pawar said it is the responsibility of those in power to aptly honour farmers, but unfortunately they are now forced to stage protest for their rights.

On the occasion of the National Farmers' Day, the former Union agriculture minister in a post on Twitter wished for justice to the farmers.

Shiv Sena MP Sanjay Raut said it is unfortunate that the central government is 'ignoring' the plight of peasants and termed it as a 'black day' for cultivators.

West Bengal Chief Minister Mamata Banerjee spoke to farmers protesting in Delhi and assured them that her party stands by them, a TMC leader said.

A day after Kerala Governor Arif Mohammed Khan declined approval for a special assembly session planned on Wednesday by the Left government to pass a resolution against the agri laws, Chief Minister Pinarayi Vijayan slammed the Centre and demanded the withdrawal of the legislation.

He was inaugurating a Left front-supported meeting at the Martyr's column here to express solidarity with the agitating farmers.

Terming as 'hypocritical' the Left parties' stand on the three farm laws, the BJP accused them of 'exploiting' the farmers while in power in Tripura, Kerala and West Bengal.

Wherever the Left parties were in power, there was 'nothing left' for the farmers and the economy, party spokesperson Sambit Patra told reporters.

Uttar Pradesh Chief Minister Yogi Adityanath also alleged that people who do politics in the name of farmers become silent on their issues when they come to power.

"Those who did not like progress and development of the country and happiness on the face of the farmers are misleading and provoking them," he said.

Meanwhile, one of the petitioners, who has approached the Supreme Court for a direction to authorities to remove the protesting farmers from Delhi's borders, has sought to implead over 40 farmer unions as a party in the pending case.

The government has repeatedly asserted that the MSP and mandi systems will stay and has accused the opposition of misleading the farmers. 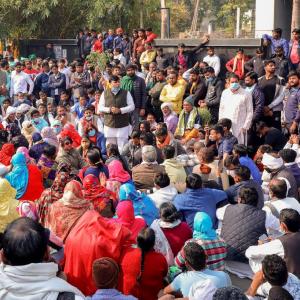