Hyderabad will be a common capital for the next 10 years once Telangana state is formed, say Congress leaders from the region. Vicky Nanjappa reports

Congress leaders from the Telangana region of Andhra Pradesh claimed that they have an indication from the Union home ministry on creation of a separate state.

Danam Nagender, who is the state labour minister, said that the Centre will bifurcate Andhra Pradesh. "From what I gather, Telangana will be formed and Hyderabad will be a common capital for the next 10 years." He also ruled out the possibility of Hyderabad becoming a Union territory and said that the capital-sharing module would be adopted for the next decade.

D Sridhar Babu, the civil supplies minister, added, "The signals are very clear and Telangana will be formed. Hyderabad will very much be part of Telangana."

However, Madhu Yashki Goud, another Congress leader from the region, told rediff.com that he is not satisfied with the indications. There are contradictory views on the matter and unless there is a confirmation from the home ministry it would not be right to do guess work, he said.

"I prefer to take a more realistic approach and not indulge in speculation. Let the statement come from the home ministry," he said. "Mere speculation will only cause a great deal of pain to the people of Telangana who have been spearheading the movement for all these years." MUST READ: The dirty 'suicide politics' over Telangana
'Telangana march nothing but a game of T20 cricket' 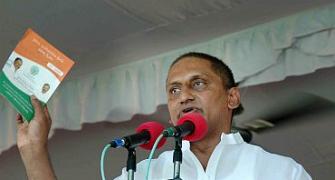 BJP, an emerging force in fight for Telangana?