The Congress on Thursday brushed aside comparisons between Rahul Gandhi with Gujarat Chief Minister Narendra Modi saying only those interested in propping up the Bharatiya Janata Party leader indulged in such acts.

On Gandhi's speech at the Confederation of Indian Industry where he spoke about the need to bring the poor and the marginalised into the political processes, Congress spokesman P C Chacko said people heard what they have been trying to listen to for long.

"We have been trying to listen something that we heard today. People are happy, they feel somebody is speaking of their feelings. Should we not appreciate that?" he said.

To questions on Gandhi's comparison with Modi, Chacko said the Congress scion had shown through his speech that nobody can be compared to him.

"With one single appearance in public today, Rahulji has shown that nobody can be compared with him... Rahulji's vision and Rahulji's ideas, I don't think Modi or anybody can come nearer to that and comparisons are done by someone who is interested in propping up Modi," he said.

On BJP's contention that Gandhi did not refer to steps for tackling inflation and corruption, Chacko said that was the job of the prime minister and the finance minister.

"The prime minister has said how poverty can be eradicated, how growth can be attained, how current account deficit can be controlled, how we are going to achieve 8 percent growth rate in the next two years," he said.

"Rahulji said something more basic. It is unfortunate that some people cannot understand that. The BJP may take time to analyse Rahulji's speech," Chacko said.

"The common man understands empowering people and inclusive growth. But people who are worried about the next election and who will become the next prime minister may not," he said. 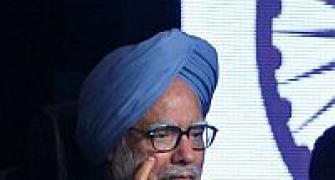 'You can't call PM or any minister just like that to JPC'
Cong joins 'third term' row: 'People want Rahul as PM'