Source: PTI
November 28, 2012 21:33 IST
After controversy over the use of a Sri Lankan child in a Gujarat Congress advertisement on malnutrition, the party is again facing flak for using photographs of farmers of other states in its advertisement related to electricity connections to farmers.

Under its campaign Join hands for change, the Congress had issued a series of advertisements that were published in websites and newspapers.

The BJP has raised questions over use of photographs, which they said were from other countries and states.

An advertisement -- showing the photo of a farmer to highlight the issue of pending power connections to them in the state -- said "Ten lakh farmers of the state are awaiting electricity connections".

The ruling BJP has alleged that the photo used in the advertisement was that of a farmer from Rajasthan, a state ruled by Congress, party sources said.

The Congress has maintained that the photos used are symbolic but the facts given in those advertisements cannot be disputed.

"The photos used in these advertisements are symbolic. But the facts given on electricity connections, malnutrition, pasture land given to industry and malnutrition among women are real. Can BJP dispute those facts," state Congress president Arjun Modhwadia asked.

Congress sources said they had outsourced this campaign to an advertising agency which was responsible for selection of material like photographs.

"It seems that a lot of the images used by them are taken from Google, but photos are symbolic and the facts in those advertisements are true," a Congress source said.

The BJP, however, got another chance to target the main opposition party on the issue of advertisement.

"This proves that the Congress campaign is based on falsehood. When the state is progressing at a very rapid rate, the Congress is trying to defame Gujarat by showing photos of other states and other countries," BJP spokesperson Jagdish Bhavsar said.

Earlier, in the same series of advertisements, the Congress found itself at the centre of a row when it was revealed that one of the photographs of a child used for an advertisement on malnutrition was that of a Sri Lankan flood victim.

Later, the party had withdrawn that picture from its ad campaign. 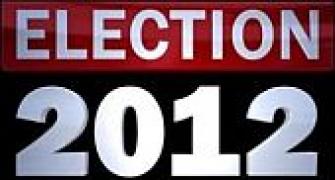 Gujarat poll: 1,534 candidates in fray for phase 1
BJP demands ban on Vastanvi from entering Gujarat
VIDEO ga ga: Congress, BJP go after each other in Gujarat