The Congress on Thursday took a jibe at Bharatiya Janata Party leaders for singing songs during a cultural evening after their national executive in Indore, saying they have "no serious job left".

"They are doing it because they is no serious job left for them to do now. But there is nothing wrong if they are engaged in entertainment. For some time at least, they are not busy in dividing people in the name of religion," party spokesperson Shakeel Ahmed said.

The party's reaction came after BJP leaders, including its President Nitin Gadkari, sang songs from Hindi films at a cultural programme on Wednesday evening, after their national executive meet.

Asked whether the BJP president's visit to the birthplace of the Dalit icon B R Ambedkar and his having lunch at the home of a Dalit leader is an imitation of Rahul Gandhi's visits to Dalit homes, Ahmed said, "If an elderly man (Gadkari) does some good work taking inspiration from a youth leader (Gandhi), there is nothing bad in it."

"BJP is a party which divides society but if this party is taking inspiration from our youth leader, we welcome it," he added. BJP goes all out to woo Dalits at national meet
'We could not take our eyes off Rahul Gandhi'
Gadkari does a Rahul, has lunch in Dalit's house 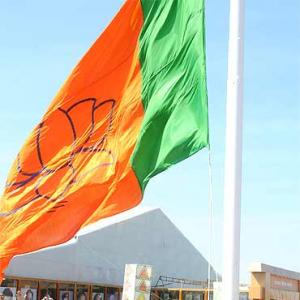 uslims should be generous, help set up Ram temple: Gadkari

Forgive me for poor decisions as BJP prez: Rajnath