Alleging there was an attempt to "hide" the truth regarding the alleged involvement of Gujarat Chief Minister Narendra Modi and his cabinet colleagues, they demanded an independent inquiry under the supervision of the Supreme Court into the Bharatiya Janata Party government's action.

"This is nothing short of a criminal conspiracy to see that the truth does not emerge. It clearly points out that the state government is trying to cover up the entire matter," party spokesperson Manish Tewari said in New Delhi.

Tewari found it a "complete travesty" that documents pertaining to a "massacre and carnage", which is under investigation of the highest court of the land and in which the "needle of suspicion is directly at the chief minister of Gujarat", gets destroyed in this manner.

The Congress spokesperson said that at a time when the investigation is going on, the disappearance or destruction of the documents that would have thrown light on "why the state machine was culpable or otherwise", clearly points out that the state government was involved in the cover-up.

In Ahmedabad, Gujarat Congress chief Arjun Modhvadia said, "The records were destroyed to hide the truth regarding involvement of Chief Minister Narendra Modi and his cabinet colleagues."

"It is criminal negligence to destroy the records on which cases are pending in the courts, as well as a commission inquiring in the matter," he said.

"I demand that an independent inquiry be constituted under the supervision of the Supreme Court in the matter," he added.

Lawyer Mukul Sinha of the non-governmental organisation Jan Sangharsh Manch, which represents some of riot victims, said, "It is a terrible thing for the government to do. We had a doubt that they had been destroyed."

"Since all the allegations were against police officer for inactions and negligence, destruction of SIB records could have serious implications," Sinha said.

Senior counsel S B Vakil representing the state government in the Nanavati Commission, probing the 2002 riots, had on Wednesday told mediapersons that telephone call records, officers' movement registers and vehicle log books of the SIB pertaining to the period of 2002 riots were  destroyed in 2007, as per government rules.

Vakil had made this revelation while talking to media-persons after the questioning of Indian Police Service officer officer Sanjeev Bhatt was over for the day before the Commission.

Now with the records destroyed it would be difficult to prove the allegations against the accused policemen and other political leaders, Sinha said.

"This could also affect judgment in the Godhra train burning case as the phone call records, movement records of police and political leaders prior, during and after the incident are no more," he added.

Eleven persons were sentenced to death and 20 others awarded life sentence, in connection with the burning of S-6 coach of Sabarmati Express train outside Godhra railway station on February 27, 2002. Sixty three persons were acquitted in the case.

All the convicts have now filed an appeal against the trial court verdict in the Gujarat High Court. 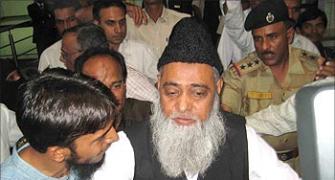