Bihar Governor Devanand Konwar was Monday heckled by a Congress woman lawmaker during his address to joint session of state legislature over alleged corruption in appointment of vice-chancellors prompting him to admonish her.

While the governor was midway through his address during the inaugural session, Congress MLC Jyoti jumped to her feet and repeatedly interrupted Konwar asking him as to 'what was the rate of the VCs' appointment?'

Konwar briefly tried to ignore the caustic remarks by Jyoti apparently aimed at him, but as she repeated her "query" several times he lost his cool and admonished her with a stinging remark for being 'the only disruptive element in the house'.

"You are the only disruptive element present in the house... please take your seat and let other members hear this speech," the governor said tersely.

However, egged on by treasury benches albeit through gestures, Jyoti continued to gesticulate to the governor and repeatedly raised the issue of alleged corruption in appointment of the VCs for several minutes before taking her seat.

The governor, in his capacity as the chancellor of the state universities, had recently appointed eight VCs to different universities. Six of the VCs were persons whose appointment was quashed by the Patna high court earlier while observing that no consultation was made with the state government as mandated under the law.

The governor's address also saw the ruling and opposition benches being locked in heated exchange of words for about 10 minutes after RJD MLA Akhtar-ul Imam accused the state government of foisting RSS agenda on the people by making the students offer 'Surya Namaskar' in schools.

As soon as the RJD raked up the issue, the treasury benches led by the Health Minister Ashwini Kumar Chaube and Animal Husbandry and Fisheries Minister Giriraj Singh swung into action and condemned Imam for his remarks.

Some BJP lawmakers led by Nityanand Rai trooped into the well of the house and advanced menacingly towards the RJD MLA before senior ruling and opposition leaders pacified them and asked them to resume their seats.

As the governor sang paeans of the state government, RJD MLA Bhai Virendra urged him to "speak the truth" at last about the state of affairs in Bihar as it may be the last address to the lawmakers by Konwar, whose term is about to come to an end.

The governor smiled and told the member not to make noise as nothing will come out of it. 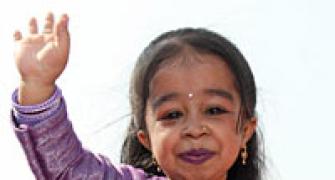