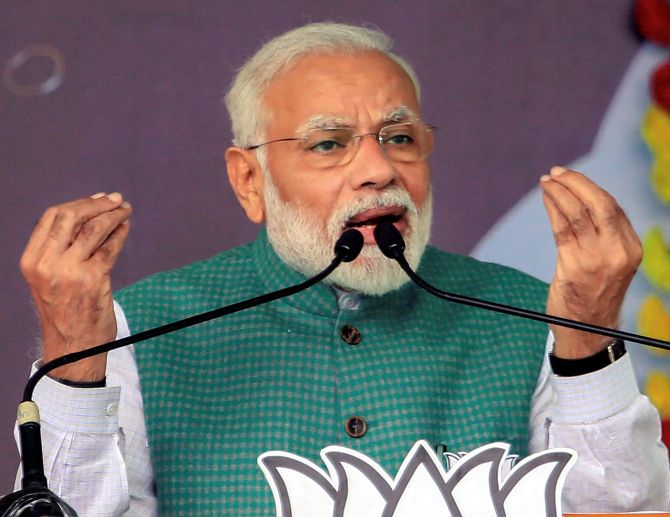 Prime Minister Narendra Modi on Saturday accused the Congress and its allies of raising a storm over citizenship law and asserted that the opposition parties were behind the unrest and arson in parts of the country.

The prime minister, addressing an election rally in Jharkhand's Dumka, lashed out at the opposition alliance in Jharkhand saying the Congress does not have any roadmap for developing the country.

"The Congress and its allies are stoking fire over the citizenship act but people of the Northeast have rejected violence. Actions of the Congress prove that all decisions taken in Parliament are correct," he said.

Modi claimed that leaders of the opposition parties have only built palaces for themselves without being concerned about the problems faced by the people.

Listing the achievements of the Bharatiya Janata Party-led governments at the Centre and the state, he said, "I have come here to give an account of the development work done by our party in the state."

Get Rediff News delivered into your Inbox.
Source: PTI© Copyright 2020 PTI. All rights reserved. Republication or redistribution of PTI content, including by framing or similar means, is expressly prohibited without the prior written consent.
Related News: Narendra Modi, Congress, PTI Photo, Jharkhand, Bharatiya Janata
SHARE THIS STORY
Print this article