How India is learning from China

When it came to national security issues, China never hesitated to take a quick decision regardless of the material costs. Nor were the superiority in military strength of the adversary a consideration, Srikanth Kondapalli points out.

After dilly-dallying on the composition, budgetary allocations, role and missions of the service arms and bureaucratic wrangling between the defence and foreign/security establishments, the idea of the Strike Corps -- the fourth such force, but the latest dedicated to mountain warfare -- took concrete shape with the nod from the Cabinet Committee on Security. 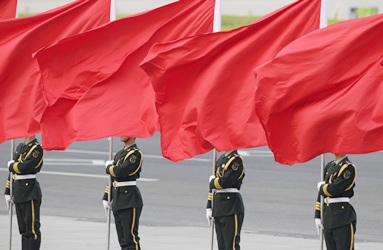 Expected to cost nearly Rs 89,000 crore in the 12th Five Year Plan and composed of three-division strength, the proposed Corps is expected to take war into Tibet and enhance the costs if the other side ventures into India.

Although doubts were expressed on the need for such a Strike Corps, the contextual reasons strengthened this idea. Firstly, the then Army Chief General Deepak Kapoor stated in late 2009 that the armed forces are gearing up for a two-theatre front under nuclear conditions -- one addressing the Pakistan scenario and the other China -- in addition to considering the nuclear factor of Pakistan and China.

In the light of the continuing Chinese assistance to Pakistan in the nuclear and ballistic missile capabilities, such an assessment is hardly out of place. His successor General V K Singh re-iterated this position. However, the above military objectives and intentions were not matched with force levels on ground -- with turf wars coming to the fore between different services and ministries.

Secondly, the mounting asymmetry in military strength between China and India as a result of China's rise is clearly visible in the Indian fears from the northern neighbour which had raised several irredentist claims recently.

In the next two decades China is expected to surpass the United States defence spending to over $1 trillion, while Beijing already surpassed every other country in Asia.

Of these figures, it is estimated that China spends nearly one-fourth of such allocations in the borders with India and is reflected in over 30 military exercises conducted in and around Tibet in the last two years, military deployment including recently of J-10 and Su-27 long-range multi-role fighter aircraft and deliberate nuclear deterrence signals by the official press that China's missiles are now land/rail mobile.

Asymmetry in military strength is also reflected in troops's strength -- although both are now gearing for hi-tech local or limited wars in which infantry strength plays marginal role. While India has four Corps -- the 14th, 3rd, 4th and 33rd Corps including 10 Mountain Infantry Divisions of a total strength of nearly 220,000 -- China has four Group Armies in 13th, 14th, 21st, 47th with a total strength of about 400,000 troops in the Chengdu and Lanzhou military regions with operational jurisdiction bordering India.

The Sichuan-based 149th Airborne Division is seen frequently deployed in Tibet for rapid troops transport, augmented also by the rail and road networks in the region. These resulted in the Indian armed forces raising threat levels vis-a-vis China from 'low' to 'medium' levels in the last decade.

With the additional 50,000 troops as a part of the Strike Corps formation, India could partly mitigate this asymmetry in strength. More significantly it provides for a psychological boost to the Indian armed forces.

Thirdly, since the Indian nuclear tests in 1998, there has been a visible increase in the transgressions of the Line of Actual Control by the border patrols. Thus on an average there is an estimated three-digit figure of such transgressions in the eastern and western sectors of the border.

While both sides certified that there existed 'peace and tranquility' on the border areas, the situation on the ground indicated to intense jockeying for space.

Transgressions like the April 15 to May 5 Depsung Plains and recently at Chumar punctured this position. An exasperated Prime Minister Manmohan Singh stated in his press briefing, during Premier Li Keqiang's visit to Delhi in May, that since 1988 the basic understanding between the two countries is to maintain peace and tranquility so that they could explore relations in the diplomatic and economic spheres.

The Depsung Plains incident sealed the mouths of the naysayers for the Strike Corps.

The decision to go ahead with the Strike Corps indicates that India is learning from China. When it came to national security issues, China never hesitated to take a quick decision -- regardless of the material costs. Nor were the superiority in military strength of the adversary a consideration.

China going full hog in the Korean War -- which resulted in over a million casualties -- explains such an unambiguous position, even though it was pitched against the most advanced forces of the day -- that of the United States. The then premier Zhou Enlai famously said about the umbilical relationship between the Korean Peninsula and northeast China as 'lips and teeth' and that China would defend at whatever cost its perceived national interests and counter threats.

India needs to take a cue from this.