News
Business
Movies
Sports
Cricket
Get Ahead
Money Tips
Shopping
Sign in  |  Create a Rediffmail account
Rediff.com  » News » The PMO, the coal scam, the missing sentence and the CBI

Did the principal secretary to the prime minister authorise the controversial meeting a joint secretary at the PMO had at the CBI headquarters to discuss the coal scam report, asks T V R Shenoy. 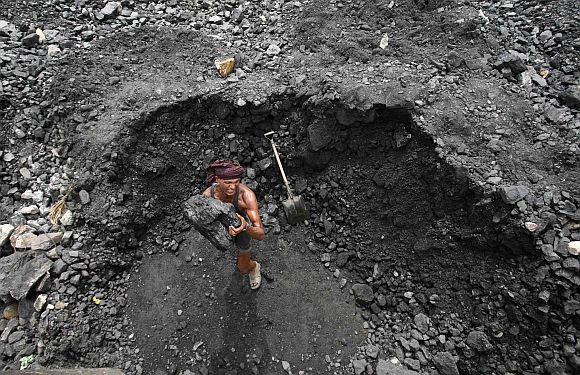 'The heart of the report was changed on the suggestion of government officials,' the Supreme Court observed on May 8, 2013, referring to the CBI report on the Coal Allotment Scam.

Who was the surgeon? In which hospital was the heart transplanted? And when was the operation carried out?

Conventional wisdom points a finger at then law minister Ashwani Kumar. But reading the nine-page affidavit filed by CBI Director Ranjit Sinha on May 6 and the observations of the apex court raises intriguing questions.

On March 6 Ashwani Kumar met the CBI director, the attorney general, then additional solicitor general Harin P Raval, and two joint secretaries. These last two have been identified as Shatrughna Singh (from the Prime Minister's Office) and A K Bhalla (from the coal ministry).

The first question was about the identity of the surgeon. The CBI director's affidavit offers four possibilites.

First, the 'heart transplant' was carried out by Ashwani Kumar.

Second, the surgery was performed by a law officer, either then additional solicitor general Harin Raval or Attorney General G E Vahanvati.

Third, the changes were carried out by the CBI at its own initiative.

Fourth, do not forget that PE 2 (Preliminary Enquiry 2), which the Supreme Court described as 'the heart of the status report', was also shown to Shatrughna Singh and A K Bhalla.

The classic trilogy of criminal investigations runs 'means, motive, and opportunity'. Any of the four parties mentioned above possessed both the means and the opportunity. I shall not speculate today as to the motive.

Page Three of Ranjit Sinha's nine-page affidavit says, 'Accordingly draft reports were taken to the office of the Hon'ble Minister for Law & Justice. A copy of the draft report pertaining to PE 219 2012 E 0002 (allocations made during 2006 to 2009), herein referred to as PE 2, was perused by him and he also made certain changes in the same...'

This seems clear enough, does it not? Ashwani Kumar changed the heart. But there is more.

The CBI director's affidavit says there were three meetings between the CBI officers and others on that eventful sixth of March.

That afternoon O P Galhotra, joint director of the CBI, and Ravikant, deputy inspector general, met the attorney general at his residence. The CBI director's affidavit clarifies, 'I was not present at the said meeting,' where the attorney general 'suggested certain minor changes in the Status Report of PE 2.'

Interestingly, he also says that Vahanvati 'neither asked for nor was given a copy of the final Status Reports.'

Why did the CBI director specify that Vahanvati was not given a copy of the report?

Is this an implied suggestion that someone else was given a copy?

Page Eight of the affidavit carries this significant line: 'From Paragraph 1.21 of PE 2, the tentative finding about non-existence of a system regarding allocation of specific weightage/points was deleted at the instance of the officials of PMO and Ministry of Coal.'

What is the importance of this sentence?

The heart of the Coal Allotment Scam is that allocations were made arbitrarily. It is this conclusion -- about 'the non-existence of a system' -- that the two joint secretaries asked the CBI to delete.

Ashwani Kumar and Vahanvati grabbed the headlines. But the Supreme Court latched on to the true curiosities, the presence of the two joint secretaries and to the fact that they suggested changes the next day.

Their Lordships observed, 'On March sixth two Joint Secretaries visit the CBI office and they are shown the draft Status Report. They go back, and come back on March seventh and suggest changes. Mr Parasaran, this is something very serious.'

Mohan Parasaran, the solicitor general, second in the hierarchy of law officers, was appearing thanks to the squabbles between Attorney General Vahanvati and former additional solicitor general Harin Raval.

To drive home the point their Lordships demanded, 'What business did these two officers have to come to the CBI? As if the CBI welcomes everyone!'

It is an excellent question. The Government of India operates under certain rules. One regulation is that an officer in one department cannot meet an officer in another wing at whim. It has to be authorised by a minister, such as V Narayanasamy, the minister of state in the PMO, or by a secretary, such as Pulok Chatterji, principal secretary to the prime minister.

Did Pulok Chatterji authorise Shatrughna Singh's participation in the many conferences of March 6, 2013? Particularly, the meeting made at his joint secretary's own request, with O P Galhotra, at the CBI headquarters?

If these were unapproved, did Pulok Chatterji demand an explanation from Shatrughna Singh? Or Union Coal Secretary S K Srivastava from A K Bhalla?

Remember that the CBI director's affidavit says Vahanvati was not given a copy of the Status Report and that the two joint secretaries, who had seen the draft on the evening of March sixth, came back the next day with a request for specific change.

Second, at least one of them took a copy of the report out of the CBI headquarters that evening, studied it overnight, and came back with suggested changes the next morning.

If a copy was taken out, did Shatrughna Singh or A K Bhalla show the CBI report to anyone else, in the PMO, in the coal ministry, or anywhere else?

Consider again the implications of what the Supreme Court observed: 'They go back, and come back on March seventh and suggest changes. Mr Parasaran, this is something very serious.'

Shatrughna Singh, according to my sources, is a truthful man. What will he say if the Supreme Court tells him to file an affidavit explaining his actions?

Congressmen offer several explanations to justify the CBI meeting the law minister and the law officers. There is no excuse at all for Shatrughna Sinha and A K Bhalla talking to CBI officers.

Let me sum the facts.

First, the Coal Allotment Scam took place at a time when Dr Manmohan Singh was also the coal minister.

Second, joint secretaries from the PMO and the coal ministry met CBI officers investigating the scandal. To which the Supreme Court asked, 'How could the report be perused by someone whose action was under the scanner?'

Third, Shatrughna Singh, A K Bhalla, or both 'suggested' that the CBI delete the line about the 'non-existence of a system', which goes to the heart of the Coalgate Scandal.

Fourth, Pulok Chatterji, Shatrughna Singh's boss, has not demanded an explanation of what he did, which suggests that he acted under orders.

I leave with you a question and a quotation.

The question is: Shall the buck stop at Pulok Chatterji's desk?

The quotation is from the Watergate scandal: 'The cover-up was worse than the crime.'