Kishtwar is the face of anti-national 'secularism'

Ultimately, like it happened in Pakistan, jihad ends up eating its own children. The secularism which we follow is self defeating, feels BJP MP Tarun Vijay.

Parliament could not function due to Kishtwar on Monday. Members wanted to discuss the events in the Jammu and Kashmir town and the usual business for the day had to be changed.

Usual business? When citizens face the brunt of an anti-national mob that shouts slogans denigrating the nation; when they hold flags of the enemy country, show no respect for the festival they celebrate, create a riot to kill and burn, what other business can a nation's supreme law making institution conduct? 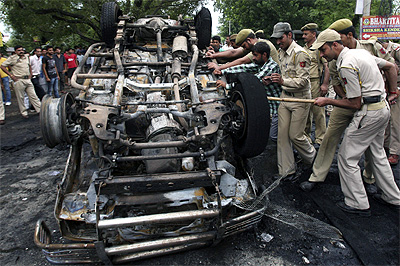 Arun Jaitley, the Leader of the Opposition in the Rajya Sabha, led the discussion which demolished the strange logic and methodology of the Jammu and Kashmir government of stopping the media and political leaders from visiting Kishtwar.

Jaitley was detained at Jammu airport from 10.30 am to 4 pm, under Section 144, a strange application of the law, hitherto unheard of. He angrily asked if Jammu and Kashmir was the property of a family and why he could not visit the victims of violence when the state government was simply watching? Why was the army not deployed immediately?

The CPI-M's Sitaram Yechury, the BSP's Mayawati, the Shiv Sena's Anil Desai, all spoke the same language -- punish the culprits and answer why the state did not act. What was the suspicious role of J&K Minister of State for Home Sajjad Kitchloo? Probe his role too.

Mayawati spoke with sadness about the killing of the son of her party's local unit chief. 'They didn't give the body of the boy to the parents till they were sure he is dead. 17 bullets were shot at his body,' she said.

A bizarre defence came from a member of the National Conference who tried to link the Kishtwar riots with a demand to abolish Article 370 and said some miscreants were already labeling local mosques for attack. Surprisingly, he did not say a single word about the mob's anti-national slogans.

The scene in the Rajya Sabha might not bring any solace to the Hindus of Kishtwar. Where can they go now? Whom should they look to for help?

Is there an Indian government that can immediately protect the citizens under attack from anti-national communal elements?

Should the 1990s be repeated again? There are pictures of the Pakistani flag-wielding mob published in Jammu newspapers. Who will take action against such traitors?

Three major Hindu religious yatras that pass through the state of Jammu and Kashmir, India's only Muslim majority state, stand suspended now. The Machher Mata Yatra which is Kishtwar-centric; the Amarnath Yatra and the Buddha Amarnath Yatra.

The 1990s saw the ethnic cleansing of Hindus. Then began the savage jihad against them. The Jammu and Ladakh regions were discriminated in every way.

Now the Hindus left in the Jammu region are being assaulted with the connivance of the state government.

Is this secularism where the Kumbh Mela, the world's biggest religious congregation of Hindus, gets a Muslim minister in charge of all arrangements and it is accepted as a great step of a secular government (Uttar Pradesh's Akhilesh Yadav government).

But a Muslim majority state will put hurdles to stop the Amarnath yatra, deny land to shelter yatris, then relent under pressure and yet will not implement the agreed proposals.

Resisting the sand mafia and seeing an illegally constructed wall demolished made a state government suspend a sub divisional magistrate. Congress President Sonia Gandhi wrote to the prime minister on this issue and international magazines and newspapers interviewed the chief minister of the state.

A mob with Pakistani flags attacked the minority in Kishtwar, terrorising them to leave the last home they have in Jammu and Kashmir.

Leave aside somebody writing to the prime minister, the media is not taking up the cause of the terrorised minorities in India's only Muslim majority state.

That is the face of secularism Srinagar practices.

Hence, there is nothing surprising when Chief Minister Omar Abdullah repeats like a daily chant the demand to remove the Armed Forces Special Powers Act from the state.

What does he want to facilitate by doing so?

So much for democracy and pluralism.

The Buddhists feel threatened in Leh and Zanskar -- the memorandum of the Ladakh Buddhist Association submitted to President Pranab Mukherjee is an astonishing tale of the Omar Abdullah's government's discriminatory attitude towards Buddhists.

Yet, none took note of it. Surely, the woes of Hindus and Buddhists never feature on the radar of the secular media and netas.

All that Kishtwar's hapless Hindus wanted was to live in peace.

Kashmir owes its name to the great sage maharishi Kashyap and the Kauls, Rainas, Bhatts were known as scholarly pandits.

Then why this hatred, the intense feeling of delineation against their ancestors and those who belong to them -- in caste, race, language, culture and lineage?

Already, after a gruesome ethnic cleansing, the miniscule Hindu minority has been exiled by the jihadis. Once Hindus had a thriving business, apple orchards, songs that defined Kashmiriyat.

They are all gone now.

The new Kashmiri generation, born in Delhi, Bangalore, Chennai and Mumbai does not speak the same Kashmiri that was spoken in Kashmir. It does not remember the rituals or songs or idiom; nor the trees, orchards and fragrance that once defined their civilisational personae.

Can this loss of a cultural fabric, the vanishing of the social language and Kashmiri characteristics, be ever valued or estimated?

Has the valley turned into a jannat of peace and Islamic brotherhood after the exodus of Kashmiri Hindus from their ancestral homes?

Has is it become a place where the levels of education and health and happiness have gone up?

The daily bomb blasts, stone pelting, ever increasing infiltration (Defence Minister A K Antony admitted in Parliament last week that infiltration in J&K has increased 80 per cent in comparison to last year) provide no opportunity for educational institutes to flourish or schools to progress.

Hatred and violence have turned the life of an average Muslim into a hell and their world-view has narrowed, forcing the rich elite of jihadi leaders to send their children to study abroad or in Bangalore.

They love to build the future of their children more than realise their jihadi dreams, while the brunt of the situation is borne by the common Muslims of Kashmir who cannot afford to send his children abroad or to Bangalore.

For them even a convent education in Srinagar is prohibitively expensive.

Ultimately, like it happened in Pakistan, after eliminating the Hindus, jihad ends up eating its own children.

That is the secularism which we follow, a sham and self defeating.

Tarun Vijay is a BJP MP of the Rajya Sabha. The views expressed are his own.

Image: The police remove a damaged vehicle after it was set on fire by a mob during a curfew on the outskirts of Jammu, August 11, 2013. Photograph: Mukesh Gupta/Reuters.