Clinton to hold 'most complicated' talks with China

Clinton's visit comes at a time when there is renewed tension in the South China Sea over China's dispute with US-ally Philippines over an island claimed by both countries.

Significantly, Clinton arrived a day in advance before the two-day talks, scheduled to commence on Thursday, as the two countries grapple to resolve tensions over the entry of activist Chen Guangcheng into the US Embassy premises in Beijing a few days ago.

The week-long drama over the dissident, who claimed to have escaped 20 months of house arrest at his village in Shandong province before seeking US protection, ended hours after Clinton reached Beijing.

Chen left the US embassy where he had taken refuge for the past six days, and the state-run Xinhua news agency said he had left on his volition.

"This round of strategic and economic dialogue is the most complicated and difficult one since it was started in 2009 due to thorny issues," said Shi Yinhong, director of the Centre of American Studies at the Renmin University of China.

Before leaving for Beijing, Clinton told the media that she will raise human rights issues.

"I can certainly guarantee that we will be discussing every matter including human rights that is pending between us," Clinton said.

She did not directly refer to Chen's issue.

US President Barack Obama too declined to comment on the issue. "Obviously, I am aware of the press reports on the situation in China, but I am not going to make a statement on the issue," he said on Monday.

Neither Beijing nor Washington have made an official statement on the reports concerning Chen.

Chen is the second Chinese person to enter the US diplomatic mission in recent months. In February, the police chief of Chongqing city barged into US Consulate in Chengdu seeking protection from sacked Communist Party leader, Bo Xilai.

He came out only after he was given protection by the central police.

US Assistant Secretary of State for East Asian and Pacific Affairs, Kurt Campbell, also came ahead of Clinton's visit to deal with Chen's issue.

The Chinese official media projected it as much an embarrassment to the US as for China.

Without directly confirming Chen's entry to US embassy, the state-run Global Times in an editorial titled 'US Embassy in a quandary over Chen' said it would be interesting to see how Washington would deal with the issue.

"The US embassy would have no interest in turning itself into a petition office receiving Chinese complaints," it said.

"In the Western media, Chen is a hot potato for Chinese authorities. Now he is making Washington uncomfortable. Prudent comments from US officials on reports concerning Chen showed the US still wants to maintain a good atmosphere for the SED," Shi said, adding that Chen's case will certainly be politicised by Obama's Republican foes, who accused him of being too soft on China.

Clinton also aid that the China-Philippine tensions were also a cause of concern. She said Manila shared "deep concerns" about events in the South China Sea and reaffirmed Washington's "commitment and obligations" under the Mutual Defence Treaty with the Philippines.

She was referring to the ongoing standoff between Chinese and Philippine vessels in waters near Huangyan Island in the South China Sea.

Manila has said it is seeking an international arbitration for the impasse, despite strong opposition from Beijing.

From the Chinese side, the talks will be co-chaired by Vice Premier Wang Qishan and State Councilor Dai Bingguo as special representatives of President Hu Jintao. Besides Clinton, US Secretary of Treasury Timothy Geithner is also scheduled to take part in the talks.

China's foreign ministry spokesman Liu Weimin said earlier that both sides will use this meeting to deepen communication and coordination on macroeconomic policies and major issues in the world economy, boost economic and trade cooperation and enhance communication on international and regional affairs.

Ahead of the talks, Geithner said the relations were better than they were.

He pointed to 13 per cent real appreciation in the Yuan's value, better protection for intellectual property rights in China and less piracy against US firms as steps taken by Beijing to address Washington's concerns.

China expects the US to demand more concession in this year's talks.

"In this year's dialogue, the US will ask China for more economic concessions, and Beijing will demand that Sino-US ties not be affected by the US presidential election," shi said. 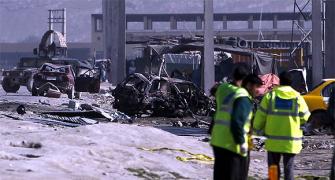 Column: Almost nothing is right with Obama and America
Agni 5 -- going ballistic over a missile

Maritime row between China and Philippines flares up

'Osama was in touch with Mullah Omar till his death'