Voicing great concern over China's remarks about "India-controlled Kashmir", External Affairs Minister S M Krishna asked Beijing to respect India's sensitivities on Jammu and Kashmir which is an inalienable part of the country.

"I hope the Chinese government will have respect for our sensitivities in Jammu and Kashmir," Krishna told mediapersons here a day after China made provocative remarks describing J & K as "India-controlled-Kashmir" and Gilgit-Baltistan as "Northen part of Pakistan".

Krishna asserted that "Jammu and Kashmir is an inalienable part of India... we have noted with great concern comments made by Chinese spokesperson on the issue".

Earlier, Krishna, who attended a meeting of the parliamentary consultative attached to his ministry, visited the iconic Taj Hotel, one of the targets during the November 26, 2008 terror attacks.

Describing the Taj Hotel as a landmark not only for Mumbai but for the entire country, Krishna said "we met here to convey out respects to those who lost lives in the 26/11 gory tragedy."

The terror attacks are a grim reminder of what terror is about, he said, adding "terror has hit India repeatedly." "The indomitable will of the people to remain fearless and contain terror by resolute action is laudable", he said.

"On behalf of members of parliament I convey deep sorrow to those who lost lives in the 26/11 tragedy," he said. 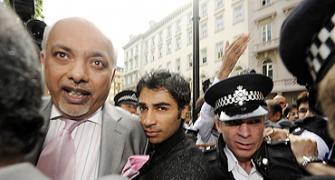