This was disclosed by Major General S S Jog, General Officer Commanding the Red Horn Division, during a seminar on counter terrorism organised by the Army for officers and allied personnel engaged in anti-insurgency operations in Guwahati on Wednesday.

Apart from the serving officers, several retired personnel of the Indian Army and paramilitary forces shared their views and expertise in counter-insurgency operations.

To a poser on intrusion by Chinese troops in the neighbouring Arunachal Pradesh state, Major General Jog said: "There is some sort of exercises, which they generally do during this particular time of the year. They have done a few exercises and certain amounts of troops have come in but it's normal routine exercise."

There has been a flurry of reports in Indian media of Chinese incursions along the border -- shrugged off by both the Indian and Chinese governments.

Major General (retied) Gaganjit Singh said that although things have improved a lot in Assam the ultimate peace is yet to return.

"The things have changed a lot. What it was in 10 years back it's not now today. Firstly, the public of Assam have realised that insurgency has given them no benefit. That realisation is a big achievement. Secondly, I can only say that ultimate peace has not come. It takes time for everything," said Major General Singh. 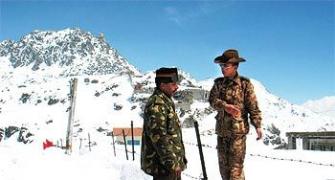