Congress leader Charanjit Singh Channi was on Monday sworn in as chief minister of Punjab, making him the first Dalit to hold the top post in the state. 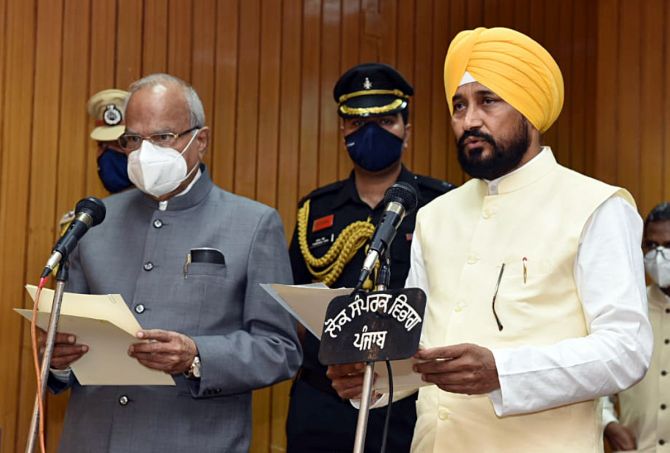 Sukhjinder Singh Randhawa and O P Soni, both outgoing ministers in the previous Amarinder Singh cabinet, were also administered oath of office and secrecy by the Punjab Governor. They will be designated as deputy chief ministers.

In his first remarks after being sworn in, the 58-year-old Channi asked the Centre to withdraw the three contentious farm laws.

Farmers in Punjab, Uttar Pradesh and Haryana have been protesting against three contentious farm laws. Several rounds of meetings between the Centre and farmer leaders have ended in a deadlock.

The oath-taking ceremony, which was scheduled to commence at 11 am, was slightly delayed. Rahul Gandhi was present at the ceremony.

Channi was administered oath by Governor Banwarilal Purohit at a ceremony held at the Raj Bhawan here. He took the oath in Punjabi. 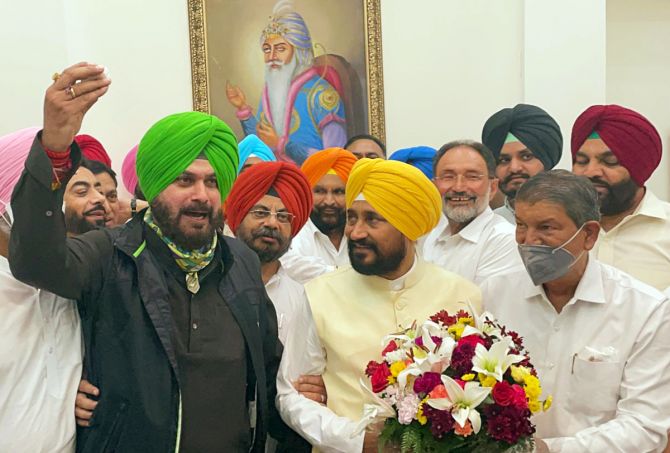 Sources said that Soni's name as Deputy CM was cleared by the party shortly before the ceremony.

While Randhawa is a Jat Sikh, Soni is a Hindu face as the Congress sought to balance caste equations with less than six month left for the Punjab Assembly polls.

Channi's appointment will allow the party to play the Dalit card in the elections. Nearly 32 per cent of the state's population, counting both Sikhs and Hindus, is from the scheduled caste community.

Its biggest concentration is in the Doaba region.

Amarinder Singh, who resigned as chief minister two days back, was conspicuous by his absence

Thanking the party leadership, Channi told reporters here that the party has given a common person a great honour.

He also described Rahul Gandhi as a 'revolutionary leader'. Channi said he will become the voice of the common people of Punjab and will always remain accessible to the people.

"Together, we have to make Punjab prosperous. Punjab is primarily an agrarian state. This government is pro-farmer," he said.

Earlier, the name of Brahm Mohindra, a senior minister in the previous Amarinder ministry, was doing the rounds for the post of Deputy Chief Minister and AICC treasurer Pawan Kumar Bansal, in a tweet, had even congratulated Mohindra.

Channi was declared the Punjab Congress Legislative Party leader after Amarinder Singh was nudged into quitting ostensibly over his 'failure' to fulfil the promises made by the party in the 2017 assembly polls.

Fulfilling the pending poll promises including action in the 2015 sacrilege and post sacrilege police firing incidents, arrest of 'big fish' involved in drug rackets and scrapping power purchase pacts, will be the focus for Channi to accomplish before the assembly elections.

Channi is a three-time legislator from Chamkaur Sahib assembly constituency in Rupnagar district.

On his predecessor, Amarinder Singh, Channi said he did good work as CM.

"He is also known as protector of water rights. He is our party leader," he said.

The party high command has given an 18-point programme and we are committed to it, said Channi, adding promises made will be fulfilled.

"We will ensure a transparent government," he added.

While the 62-year-old Randhawa is a three-time legislator and currently represents Dera Baba Nanak assembly constituency in Gurdaspur district, the 64-year-old Soni was holding the ministry of medical education and research in the Amarinder Singh-led cabinet. 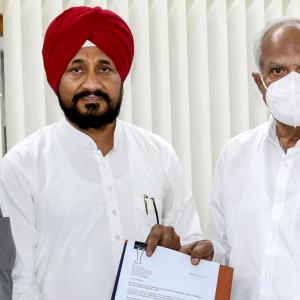 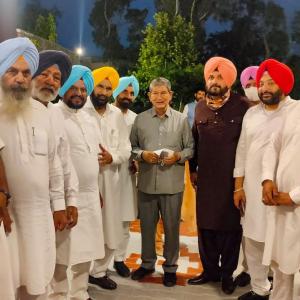