Census to be launched on April 1

To create a comprehensive identity database in the country, the government will launch the 2011 census on Thursday to cover 1.2 billion residents of the country living in all 35 states and Union Territories.

During the mammoth exercise, the enumerators for the first time will collect information like owning mobile phones, computers, internet and treated or untreated drinking water, finger prints and photographs which will help the government formulate plans and strengthen security of the country.

Home Secretary Gopal K Pillai said after completion of the exercise, the largest census to be attempted in the history of mankind, a National Population Register (NPR) will be created in which the government will have the entire population of the
country under one database.

"Once the NPR is completed we will have the photographs of the entire population. First time we will be able to have specific information about the entire usual residents of the country," he told the media.

Pillai said once the NPR was completed, the government will give a unique number to each usual resident of the country.

The Census operation, to be formally launched by President Pratibha Patil, would cost around Rs 2209 crore while the approved cost of the scheme for creation of NPR is Rs 3539.24 crore.

This is for the first time that NPR is being prepared. The database will be built, maintained and updated by the Registrar General and Census Commissioner of India.

Census 2011 will be conducted in two phases. The first phase, called the Houselisting and Housing Census, will be conducted between April and July, depending on the convenience of different states/UTs. This operation is to be conducted over a period of 45 days in each State/UT. Thus a state starting on the April 1 will finish on the May 15 and so on. The details required for
creating the NPR will also be canvassed during this phase.

The second phase, called the Population Enumeration phase, will be conducted simultaneously all over the country from February 9 to 28, 2011.

The Census would cover all 640 districts, 5767 tehsils, 7742 towns and more than 6 lakhs villages. More than 24 crores households will be visited and 1.20 billion people enumerated during this exercise. To carry out this massive exercise more
than 2.5 million people will be engaged.

The home secretary, however, made it clear that no information will be collected on castes as no caste-based census has ever been conducted in independent India.

"We have never conducted a census on castes and it will be difficult to verify the caste of any individual. Therefore we may have a distorted version of caste census...let me at least for once be blunt that, I think, in the future, we have to into a caste-less society in India....," Pillai said.

As the preparation of NPR involves house-to-house enumeration, this shall be undertaken along with the Houselisting and Housing Operations of Census 2011.

"Though photographs and fingerprints will be taken, no decision has been taken on iris scan," Pillai said.

The UIDAI will undertake biometrics based de-duplication and assign UID numbers to each resident. The cleaned database along with UID number will form the final NPR database.

It is proposed to issue identity card, which will be a smart card with UID number printed on it and  include basic details like name, mother's / father's name, sex, date and place of birth, photograph.

Asked whether allotment of unique number to all usual residents will pave way for citizenship to the large number of illegal immigrants living in the country, Pillai said, "The allotment of unique number will not give the guarantee of citizenship".
The issue of identity (smart) cards will be done in coastal villages, followed by the towns, cities in coastal areas and so on till the country is covered.

A biometrics based identity database along with UID number would benefit the common man in many ways. It will obviate the need for producing multiple documentary proofs of identity by an individual for  availing government or private services. UIDAI's first big IT project gets 19 bids
UID no. to check teachers' absenteeism? 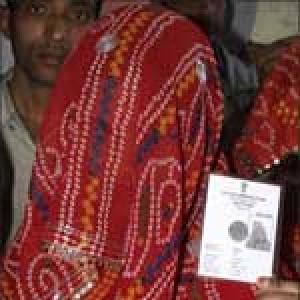