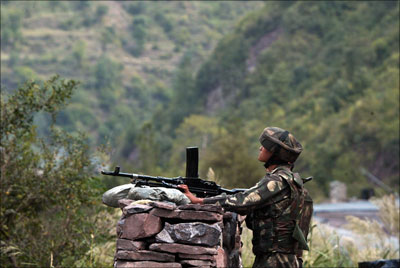 An Army soldier was killed and three others injured as Pakistan violated the ceasefire for the second consecutive day along the Line of Control in Jammu and Kashmir's Rajouri district on Monday, officials said.

The incident occurred in Keri Battal forward area and further details are awaited, they said.

Around 5.30 am, the Pakistani Army initiated unprovoked ceasefire violation by resorting to shelling mortars bombs and firing of small arms along the LoC in Sunderbani Sector of Rajouri district Monday, a defense spokesman said.

Four civilians, including three members of a family, were killed and several others injured as Pakistan targeted dozens of villages in over 100 incidents of ceasefire violations along the LoC in the state, especially in the twin districts of Poonch and Rajouri, since then.