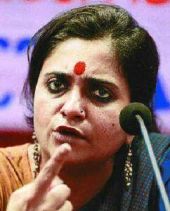 The Central Bureau of Investigation on Wednesday registered a case against social activist Teesta Setalvad and her organisation for alleged violation of Foreign Contribution Regulation Act in recieving funds from abroad without taking prior permission from the home ministry.

In the FIR registered this evening, the agency also named Setalvad's husband Javed Anand and Gulam Mohammed Peshimam, both directors in Sabrang Communications and Publishing based in Santacruz, Mumbai.

When contacted, Setalvad, who was at fore front of campaign for 2002 Gujarat riots victims, said "we are only responding to media reports which are following leakage from the government side."

"We have got nothing from CBI. While we maintain that no rules were violated, we still suo motu wrote a letter to CBI on June 30 assuring them full cooperation and stating that we were willing to co-operate in any investigations. We also told them to give us a notice to furnish any documents they require," she said.

CBI sources said in New Delhi that the case was registered after the agency completed verification of all the documents submitted by the home ministry while referring the probe to the agency.

They said it is alleged that the accused named in the FIR, in a criminal conspiracy, accepted foreign contribution without registration and prior permission from the Union home ministry as mandated under FCRA norms.

The home ministry had referred the probe to CBI last week alleged that its probe has indicated that Sabarang Trust and Citizens for Justice and Peace, run by Teesta and her husband Javed Anand were running a magazine "Communalism Combat" as co-editors as well as printer and publisher of their company Sabrang Communication and Publishing Pvt Ltd and allegedly received foreign contribution.

Under FCRA, no foreign contribution shall be accepted by any correspondent, columnist, cartoonist, editor, owner, printer or publisher of a registered newspaper.

CJP, which has been fighting cases for victims of 2002 Gujarat riots, had received a total foreign contribution of around Rs 1.18 crore from 2008-09 to 2013-14. According to the notice, more than 80 per cent or nearly Rs 95 lakh was spent for legal aid, the MHA had alleged.

While the entity was registered for 'Educational and Economic' purposes, it received foreign contribution for activities such as 'Legal Aid' which is covered under purpose 'Social'. Hence, it violated FCRA rules, sources contended.

"On review of vouchers of the association, it was found that Sabrang Trust has made payment of Rs 12 lakh from FCRA-designated account to Citi Bank and Union Bank of India on account of credit facilities taken through credit cards belonging to Setalvad and Anand.

"This amounts to use of foreign contribution for the purposes not authorised as per the provisions of FCRA 2010. Thus, the Association has violated Section 8(1) (a) of FCRA 2010," the home ministry notice said.