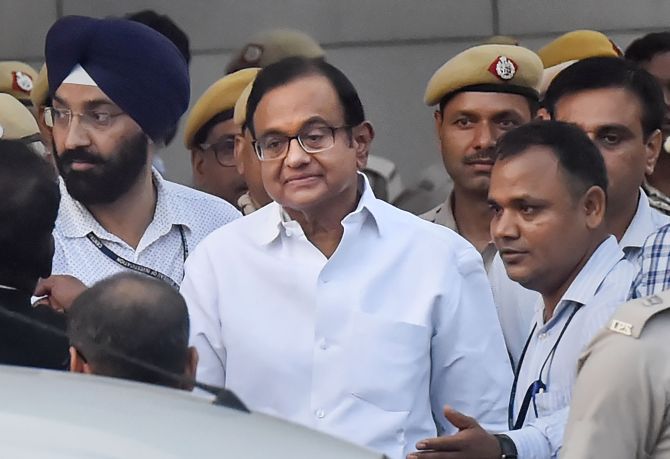 The Central Bureau of Investigation moved the Supreme Court on Friday seeking review of its verdict granting bail to former finance minister P Chidambaram in the INX Media corruption case saying some errors apparent on record have crept into the October 22 verdict.

The top court had granted bail to Chidambaram in the case lodged by the CBI saying he is neither a 'flight risk' nor is there a possibility of 'his abscondence from the trial'.

"In the order of dismissal some errors apparent on record have crept in, which if considered, would have material change in the outcome of the SLP," said the review petition filed through advocate Rajat Nair.

The CBI said the review petition has been filed as the findings rendered in the October 22 verdict are contrary to record, which is required to be corrected and suitable order are required to be passed.

"It is submitted that the finding recorded by the high court was on record of the SLP which has completely escaped the attention of this Court though specifically invited on behalf of the CBI during the course of hearing.

"This has resulted into an error apparent on the face of the record resulting into serious miscarriage of justice. This court,being the court of record should clarify this position and review its order," the CBI's review plea said.

The probe agency said that as pointed there are 'cogent and credible evidence' in form of witness statement under section 161 and 164 of Code of Criminal Procedure, which clearly records that the SLP petitioner (P Chdiambaram) has attempted earlier and is trying to influence the said witnesses and pressurize them not deposing them against the SLP Petitioner and his son (Karti Chidambaram).

"It is submitted that in absence of this court per using the statements available with the investigating agency, the said findings could not have been rendered by this court to hold that the allegation is a mere averment without any basis," the review plea said.

"It is stated that the said allegation was not a mere averment of the investigating agency, but was based on the cogent material available with it and as such could not have been rebutted without even perusing the material available on record. In view of this ground alone, the judgment rendered by this court is liable to be reviewed," it added.

The CBI said the finding rendered by this court is clearly contrary to the record and amounts to error apparent on the face of the record.

The probe agency also requested the top court to accord hearing while adjudicating the review plea.

On October 22, the top court while brushing aside the CBI contentions that 74-year-old senior Congress leader tried to influence two material witnesses in the case, said that no details are available as to 'when, where and how those witnesses were approached'.

P Chidambaram is currently in custody of Enforcement Directorate (ED) till October 30, in the money laundering case related to INX Media scam.

He was arrested by the CBI on August 21 in the corruption case which was registered on May 15, 2017 alleging irregularities in a Foreign Investment Promotion Board (FIPB) clearance granted to the INX Media group for receiving overseas funds of Rs 305 crore in 2007, during Chidambaram's tenure as finance minister.

The top court had said that statement made by the CBI that Chidambaram has influenced witnesses and there was likelihood of his further influencing them cannot be the ground to deny bail to him when there was 'no such whisper' in six remand applications filed by the agency before the trial court.

The apex court had also dismissed CBI's plea challenging the findings of the high court which had said that Chidambaram was not a 'flight risk' and there was no possibility of him tampering with the evidence.

It had said that since the high court has expressed its views on the merits of the matter in its September 30 verdict, they will not have any bearing either in the trial or in any other proceedings.

The top court noted in its judgement that the CBI has filed a charge sheet against Chidambaram and others in the case and other co-accused have already been granted bail.

It had not accepted the contentions of Solicitor General Tushar Mehta, who had appeared for the CBI and had raked up the issue of persons accused in economic offences fleeing the country.

"At this stage itself, it is necessary for us to indicate that we are unable to accept the contention of the Solicitor General that 'flight risk' of economic offenders should be looked at as a national phenomenon and be dealt with in that manner merely because certain other offenders have flown out of the country," the top court had said.

Regarding the CBI's claim that Chidambaram had influenced witnesses in the case, the top court said that there are no details as to the form of approach of those two witnesses either SMS, e-mail, letter or telephonic calls and the persons who have approached the material witnesses.

A lawyer associated with the case said that Special Leave Petition against the October 23 verdict giving relief to Shivakumar has been filed.

He was arrested by the ED on September 3 and walked out of the Tihar Jail on Wednesday evening.

He was in Judicial custody as the trial court had denied him bail in the case.

The high court on Wednesday granted him bail saying he cannot tamper with the evidence as the documents are with the investigating agencies.

The ED had opposed his bail plea saying he was an influential person and he could tamper with evidence and influence witnesses if released.

Shivakumar, a 7-time MLA in Karnataka, was booked along with Haumanthaiah -- an employee at Karnataka Bhavan in New Delhi-- and others for alleged offences under the Prevention of Money Laundering Act (PMLA).

The case was based on a charge sheet filed by the Income Tax Department against them last year before a special court in Bengaluru on charges of alleged tax evasion and 'hawala' transactions worth crores or rupees.

The I-T department has accused Shivakumar and his alleged associate S K Sharma of indulging in transactions involving huge amounts of unaccounted money on a regular basis through 'hawala' channels with the help of three other accused.