Pon Radhakrishnan is also a Union minister of state.
His opponent is the richest candidate in Tamil Nadu.
A Ganesh Nadar reports from Kanyakumari. 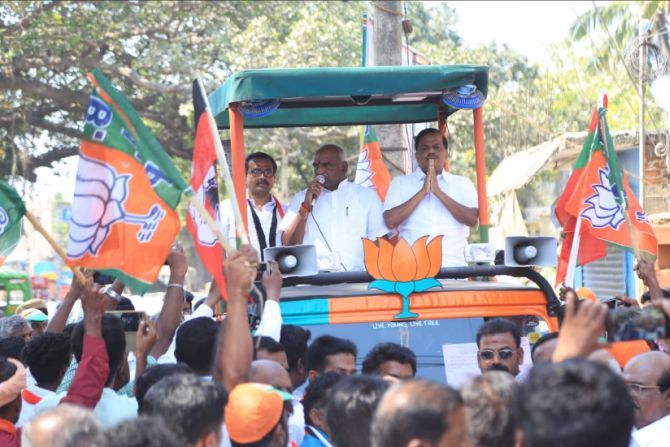 Bharatiya Janata Party supporters have gathered outside Hotel Sahana Castle in Nagercoil. No one seems to know where the candidate is.

Cadres from the All India Anna Dravida Munnetra Kazhagam and Pattali Makkal Katchi -- the BJP's allies in Tamil Nadu -- are also out in large numbers and getting restive.

The BJP election office, which functions out of Pon Radhakrishnan's old home, says the MP is traveling from Marthandam to Kallikavilai on the Kerala border.

The uncertainty about Radhakrishnan's whereabouts is not the only thing bothering activists from the BJP's supporting parties.

Says Misha Paulraj, a PMK worker, "The Salem-Chennai expressway was stopped because we were losing votes. Then Nitin Gadkari comes and announces that he will make sure the highway is built. Is he aware of the situation in Tamil Nadu?"

"Piyush Goyal speaks as if he is in some state in the north. Why don't these leaders talk to the local cadres before opening their big mouths?" Paulraj wants to know.

Pon Radhakrishnan, Kanyakumari MP and minister of state in the Narendra Damodardas Modi government, too tried to bring some projects to his constituency, but came a cropper.

Radhakrishnan wanted to establish a container port at Colachal, Iniyam and Kovalam villages, but after the fishermen rose in protest he had to withdraw his plan.

Then he announced that the port would be built between Colachal and Kovalam and inaugurated it at a marriage hall in Nagercoil. This became the talk of the district, a source of much mirth.

Kanyakumari is no stranger to the rest of the country as the throngs of tourists at the Vivekananda rock memorial will testify. The confluence of the Arabian Sea, the Indian Ocean and the Bay of Bengal is a must-see for many Indians.

The Congress campaign headquarters in contrast is buzzing with activity. The candidate's itinerary is posted on on a board. From early morning till 1.40 pm he was canvassing in villages, at the rate of 10 minutes in every village.

At 3 pm, he is to take part in a bike rally in Nagercoil and go around town till the campaign ended in the evening.

H Vasanthakumar, the Congress nominee, is also the richest candidate in Tamil Nadu with declared assets of Rs 417 crores (Rs 4.17 billion). He owns the Vasanth and Co retail chain and his ascent in business I wrote about earlier..

Vasanthakumar is also an MLA -- from Nanguneri, which falls under the adjoining Tirunelveli Lok Sabha constituency. Readers may recall my colleague Saisuresh Sivaswamy and my interview with Vasanthakumar before the 2016 assembly election.

The cash seizures in Tamil Nadu startling all of India reared its head in Kanyakumari as well. One of Vasanthakumar's relatives was arrested last week with a large sum of money. 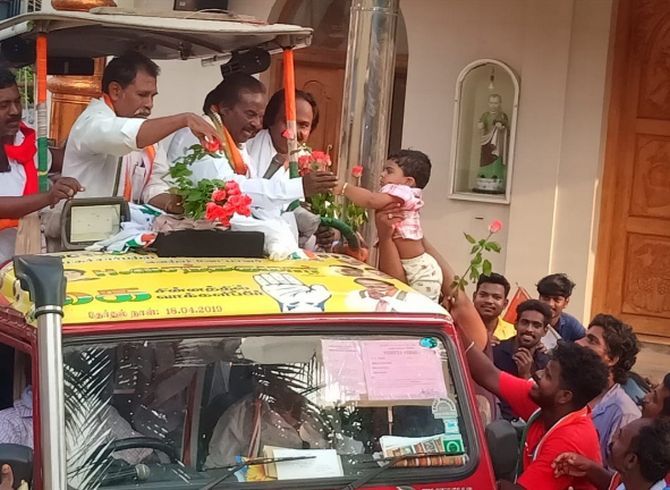 The first to turn up for Vasanthakumar's bike rally in Nagercoil are Marumalarchi DMK cadres, followed by DMK supporters. Finally, Congress activists turn up.

Soon, the place is teeming with people in spite of the dizzily high temperatures because it is the last day of the election campaign in Tamil Nadu. The rally features song and dance which you can see in the video below:

As we leave Nagercoil, the heavens open up in a gentle shower. Traveling in the opposite direction is the candidate from T T V Dinakaran's Amma Makkal Munnetra Kazhagam with his own bike rally.

It is not as large as the Congress's bike rally, but not small either.

Could TTV's nominee play the spoiler when the votes are counted on May 23? 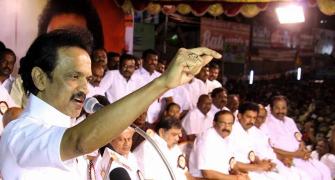 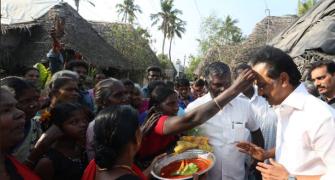 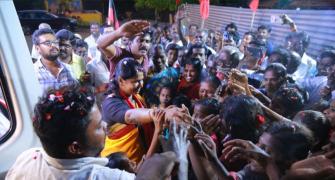 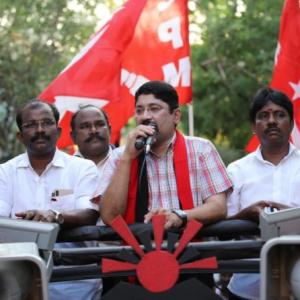 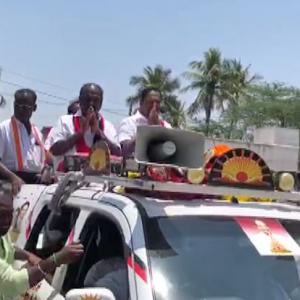