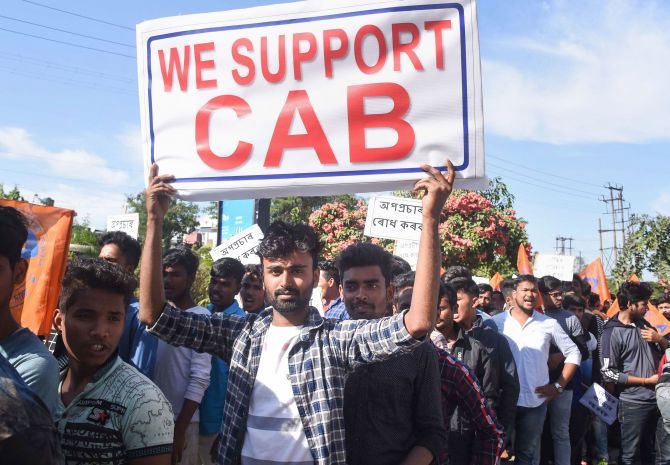 Amid widespread protests in the Northeast, the Centre on Tuesday said the Citizenship Amendment Bill (CAB) will not lead to the domination of Bengali-speaking people in Assam, neither it is against the interest of indigenous people of the state.

In a series of tweets with the hashtag 'Mythbusters', the central government's Press Information Bureau (PIB) said there have been several myths, including that the CAB will provide citizenship to Bengali Hindus.

However, the fact is CAB does not automatically confer Indian citizenship to Bengali Hindus and it is just an enabling legislation for persons belonging to six minority communities of Afghanistan, Pakistan and Bangladesh, the PIB said.

It has been proposed on extremely humanitarian grounds as these minorities had fled from these three countries due to persecution on grounds of their religion, it said.

'Myth: CAB will lead to domination of Bengali speaking people. Fact: Most of the Hindu Bengali population is settled in Barak valley of Assam, where Bengali is declared the 2nd state language.

'In Brahmaputra valley, Hindu Bengalis are settled in isolated pockets and have adapted themselves to Assamese language,' one of the tweets said.

The PIB said there is a myth that the CAB is a ploy to grab tribal land by accommodating Hindu Bengalis but the fact is Hindu Bengalis are mostly settled in Barak valley, away from the tribal belts and blocks.

Further, the CAB does not contradict laws and regulations for protection of tribal lands and it is not applicable in areas where provisions of Inner Line Permit and sixth Schedule areas.

There has been a myth that the CAB dilutes the 'Assam Accord', which provides for identification and deportation of illegal immigrants from the state.

However, the fact is CAB does not dilute the sanctity of 'Assam Accord' as far as the cut-off date of March 24, 1971 stipulated for detection and deportation of illegal immigrants is concerned, the PIB said.

'Myth: CAB is against the interest of indigenous people of Assam. Fact: CAB is not Assam-centric.

'It is applicable to the whole country. CAB is definitely not against National Register of Citizens, which is being updated to protect indigenous communities from illegal immigrants,' it said in another tweet.

There is a myth that the Bengali Hindus will become a burden for Assam but the fact is CAB is applicable to the whole country and persons facing religious persecution are not settled only in Assam and they are staying in other parts of the country as well.

'Myth: CAB will trigger fresh migration of Hindus from Bangladesh. Fact: Most of the minorities have already migrated from Bangladesh. Moreover, the scale of atrocities on them in Bangladesh has been coming down in recent years.

'In the changed scenario, large-scale migration on account of religious persecution is now a remote possibility.

'Further, there is a cut-off date of December 31, 2014 and benefits under CAB will not be available for members of the religious minorities who migrate to India after the cut-off date,' it said.

The PIB said there is a myth that CAB is discriminatory against Muslims. However, fact is any foreigner of any religion from any country can apply for Indian citizenship if he or she is eligible to do so as per the existing provisions of the Citizenship Act, 1955.

"The CAB does not change these provisions at all. It only enables migrants of six minority communities from three countries to apply for Indian citizenship if they meet the given criteria," it said.

The PIB's publicity drive came on a day Assam and other Northeastern regions witnessed widespread protests against the proposed legislation.

The bill, passed by the Lok Sabha on Monday night, seeks to give Indian citizenship to members of Hindu, Sikh, Buddhist, Jain, Parsi and Christian communities, who have come from Pakistan, Bangladesh and Afghanistan, till December 31, 2014, facing religious persecution there.