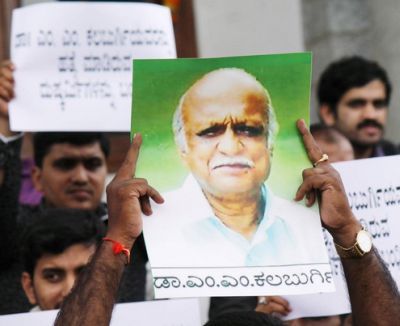 The unidentified body found with two bullet injuries at a village in Belagavi district was not of one of the two killers of writer M M Kalburgi, but a criminal who was killed by his two brothers and his friend, a senior police official said Belagavi on Sunday.

The body has been identified as that of one Mahantesh Chidanand Shirole of Kadapur village of Chikodi taluk, who was killed by his brothers Nandkumar and Uday and friend Manjunath Hosur due to family feud, DIG Hemant Nimbalkar said.

Mahantesh was a criminal involved in murders in Pune, Kolhapur and Chikodi, he said.

The DIG said the trio took Mahantesh to Goa under the pretext of a pleasure trip with a plan to kill him. Before that Nandakumar had procured a country made pistol from his co-worker, he said.

The body was recovered recently at Manikwadi between Khanapur and Honde in the district on Belgaum-Goa NH 4.

Police had in the first week of September released the sketches prepared on the basis of the accounts given by the deceased scholar's wife, Umadevi, and another person who had a glimpse of the killers.

The state CID is probing the killing, which has led to national outrage with several writers returning their Sahitya Akademi awards over "rising intolerance", citing the murder of Kalburgi as one of the reasons for their action.

Maharashtra police have exchanged data and sketches of suspected murderers of anti-superstition activist Narendra Dabholkar and veteran Communist leader Govind Pansare at Kolhapur in that state.

Karnataka police had also visited Maharashtra to collect vital clues, if any.

Police of both states are trying to ascertain if there is any link between Kalburgi's murder and the killings of Dabholkar and Pansare.