Bommai also hinted that the damage caused to the public and private properties may be recovered from the rioters.

"When riots took place in Uttar Pradesh, certain action was taken according to the situation prevailing over there. We are reviewing the situation in Karnataka. We will go by our law," Bommai told reporters in Shivamogga.

He was replying to a query seeking clarification on the demand for a bulldozer-like punishment.

In Uttar Pradesh as well as in Madhya Pradesh, the state governments have been using bulldozers to demolish the houses of alleged rioters.

To a question whether bulldozers will be used to bring down the buildings of the alleged rioters as was done in the northern states, Bommai said the government will take action as per law.

When asked whether stringent action will be taken against those who were involved in the arson and violence in Hubballi, Bommai said many people were arrested within 24 hours of the incident and the rioters have been booked under stringent sections of the Indian Penal Code.

He said strong measures taken during the violence at DJ Halli and KG Halli police station limits in Bengaluru, will be repeated here.

Bommai referred to the incident that happened in 2020 in the state capital where about 4,000 people from a community had allegedly set fire to the residence of Congress MLA R Akhanda Srinivas Murthy and his sister over a social media post by his relative.

The mob then torched many vehicles and set the DJ Halli and KG Halli police stations afire. In that incident, four people were killed, including three in police firing.

"The court has ordered recovering money from the DJ Halli and KG Halli rioters and accordingly a recovery commission was set up. Several such things were done earlier," Bommai said.

Earlier, speaking to reporters in the temple town of Sringeri, Bommai dismissed the allegations that innocent people are being held in connection with the Hubballi violence and said arrests were made based on evidence.

"No innocent person has been arrested. Based on evidences, people have been arrested," Bommai told reporters at Menase helipad in Sringeri.

The chief minister said no one involved in the violence will be spared and the government will ensure that they are punished.

"Those who take law into their hands will face action. Attacking a police station is an unpardonable act," Bommai said.

He was replying to a query on opposition parties' apprehensions that innocent people are being framed in the Hubballi incident.

Regarding the Congress party's allegation that there was ’Ravana Rajya' instead of ’Rama Rajya', Bommai said what common people say is important and not that of the opposition parties.

"We cannot expect anything better from the opposition," the chief minister said.

A large number of people from a community on Saturday midnight went on a rampage in the Old Town of Hubballi over a social media post.

The police have so far arrested 89 people while four persons named in the FIR are still at large. The 89 people appeared before court via video-conference on Monday. 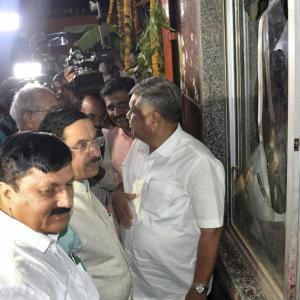