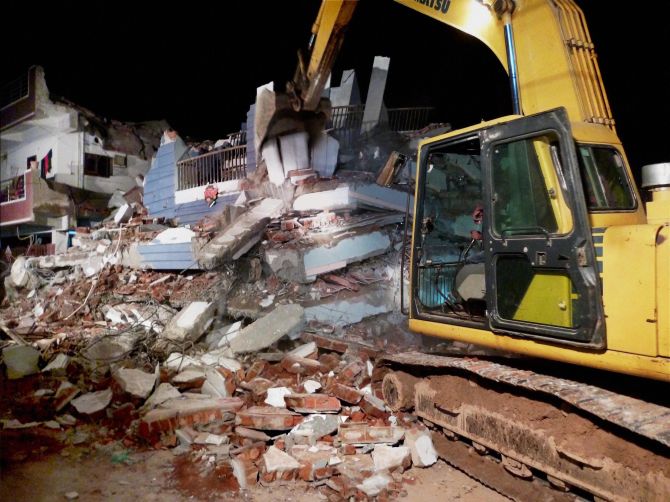 Three persons died and two others, including a minor boy, were rescued while several others are feared trapped as an under-construction building collapsed in Nanakramguda area in Hyderabad on Thursday night.

About 10 families, mostly labourers, were living in the premises of the building, according to Hyderabad Mayor B Rammohan.

Telangana Home Minister N Narsimha Reddy and several other leaders and officials rushed to the spot where rescue work is underway.

Reddy said violation of rules has been noticed in the construction of the building.

The home minister said different figures were being given on the number of persons trapped under the debris.

“No body is saying exactly,” he said.

State Excise Minister T Padma Rao said the number of persons trapped would be known only after the debris is removed.

“Some say six persons have died and some say seven died. Nobody knows how many were there and how many killed, but truth would come out only after the slabs are lifted,” he said.

The immediate priority right now is to remove the debris and ascertaining how many were trapped, he said.

The government would act tough against those responsible for this tragedy for any violation of rules, the excise minister said.

Expressing anguish on the collapse of the multi-storey building, Chief Minister K Chandrashekar Rao directed ministers from the city to take care of the rescue and relief operation.

He said the rescue work took time as the way to the collapsed building is narrow. More machines have arrived for the operations, he said, adding some violation of rules have been found in the construction of the building.

The victims, who were rushed to the hospital, hail from Visakhapatnam, Chattisgarh and some of them are local residents, the Mayor said.