The first part of the Budget Session of Parliament concluded on Friday with the Rajya Sabha witnessing a low as some All India Anna All India Anna Dravida Munnetra Kazhagam members broke mikes on the chairman's table.

The Lok Sabha failed to transact any business for the third consecutive day as proceedings remained paralysed over the Sri Lankan Tamils issue. On the last day, the Rajya Sabha could not function properly as members from the All India Anna Dravida Munnetra Kazhagam and the AIADMK forced repeated adjournments.

The Budget session, which began on February 22, will resume on April 22 after a four-week recess. The Session will conclude on May 10.

However, just as curtains were drawn on the first part, Rajya Sabha saw bedlam as two of the four mikes on the chairman's table were wrenched out and broken by AIADMK members, who were agitating over Sri Lankan Tamils issue.

AIADMK member V Maitreyan was in the lead in this act during which papers were torn and thrown up in the air and some stationery damaged. Soon after Renuka Chowdhury, who was in the chair, adjourned the house.

After doing so, she made certain remarks against the protesting members, which infuriated the DMK members further. Chowdhury left the house but Congress members Ambika Soni, Jairam Ramesh and R P N Singh had to intervene to placate the DMK members.

DMK member Tiruchi Siva got so agitated that he required medical help and an ambulance was called as a standby. The matter ended after Chowdhury returned to  apologise.

As soon as the Lok Sabha assembled for the day, DMK and AIADMK members trooped into the Well raising slogans against the government for ‘not making efforts’ for a stronger resolution against Sri Lanka over the ethnic Tamils issue at the United Nations Human Rights Commission on Thursday.

Members from Tamil Nadu, barring those from the Congress, were in the Well shouting slogans and waving placards which read 'We condemn betrayal of India against Tamils at UNHRC'.

This was countered by the Congress members from Tamil Nadu, who shouted slogans that Congress has always worked for the Tamil cause.

The Rajya Sabha also saw two adjournments -- first soon after the House met for the day and then at noon. Members from DMK and AIADMK trooped into the Well as soon as the House resumed at noon and amid similar scenes, it was adjourned till 2.30 pm.

When the House reassembled, it was finally adjourned for the day within minutes. Some Congress members were seen waving placards in the Lok Sabha against ‘police atrocities’ on pro-Telangana activists in Andhra Pradesh.

Earlier, Parliamentary Affairs Minister Kamal Nath was seen having a word with Leader of the Opposition Sushma Swaraj apparently on ensuring that the House functions. Key legislations such as the Food Security Bill and Securities and Exchange Board of India (Amendment) Bill were on the Lok Sabha's agenda, but could not be taken up.

Shouting slogans such as ‘We want justice’, ‘betrayal, betrayal’, members of Parliament from both the Tamil Nadu parties waved photos of Liberation Tigers of Tamil Eelam chief Prabhakaran's son Balachandran killed by Sri Lankan force, towards the chair as well as the treasury benches when Prime Minister Manmohan Singh was present. 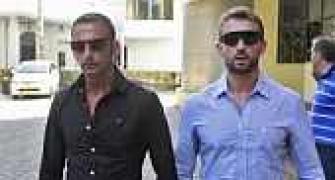 US welcomes passage of UNHRC resolution on Lanka