The B S Yeddyurappa faction within the Karnataka Bharatiya Janata Party has threatened to pull down the government if the chief minister is not changed by July 5.

With the backing of almost 51 MLAs who are seeking a leadership change in the state, the Yeddyurappa group has said that there would be serious repercussions if their demands were not met.

The party's central leadership will have to take a decision in this regard by July 5, they said. They also said that they would make alternate arrangements and would even sit separately in the legislative assembly if Jagadish Shettar is not made the next CM.

Toeing their line were 8 MPs of the BJP who have threatened to quit the party if the demand is not met.

The leadership cannot always ignore our demands and it makes no sense for Sadananda Gowda to continue in office when he has lost the faith of the MLAs, the rebelling leaders pointed out. A decision in this regard will be taken in New Delhi.

Meanwhile, former chief minister Yeddyurappa, who stage-managed this entire campaign during his meeting with BJP emissary from New Delhi, Dharmendra Pradhan, was in no mood of a compromise. Sources say he did not even discuss the issue.

"My leaders have told you what they want. Do not discuss politics with me. Please have some coffee and talk about something else," Yeddyurappa told Pradhan.

Pradhan, meanwhile, will appraise the leaders in Delhi about the situation and a decision would be taken only after that.
Vicky Nanjappa in Bangalore
Related News: Yeddyurappa, BJP, New Delhi, BSY, Gowda
Print this article
Yeddyurappa faction meets BJP envoy; hopeful of CM change
Yeddyurappa says BJP should promote Modi as PM candidate 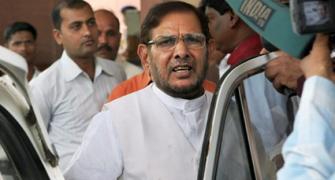 'We back Pranab, but not his wrong economic policies'