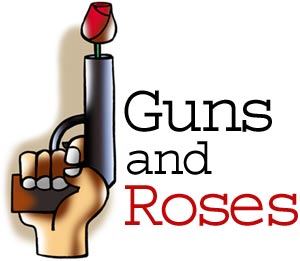 The evening had started perfectly pleasantly. Ten of us were seated around an oval dinner table and we, my wife and me, were the special guests. In fact, the dinner had been arranged by our friends, the hosts that evening, to introduce us to several of their American friends.

The food was simple but tasty -- a crisp salad, wild rice with chicken in a sherry sauce and... more yet to come. The wine was Californian and those imbibing had reached a mellow state in which you either reflect on the state of the universe or expound on it. The roses at the centre of the table were red and radiant. The guests dressed in casual elegance looked on to the Pacific Ocean from the huge bay windows.

Having got over the introductions, we had reached a stage when others were asking me the usual questions which confront a diplomat at this privileged point in time in America:

"What is your view on jobs being taken away from here to Bangalore?"

"What makes Indian kids so good at maths?"

"Our investments have so far been in China, but we are now looking at India. What are the relative strengths?"

I was happily giving all my usual replies. I am a little puzzled when I read comments that the West thinks of India as a land of Maharajas, naked sadhus and snake-charmers. May be it was so, some decades ago and may be it is still so in some far flung jhumritalaiyas in America.

Today, the perception among the educated, however, is of India as teeming with whiz kids and Lakshmi Mittals. Perceptions are always different from realities, I guess.

"In your short experience of this country what do you find the strangest?" a lady to my right asked. I turned to look at her as this was an unusual question. She looked bright and inquisitive with mirth-filled eyes. She seemed like the American who genuinely cares for what the world thinks of America. I thought for a moment.

"The strangest? The most inexplicable? Frankly, I don't understand at all the attachment to guns and the failure to ban them. Every evening on television, I see so many senseless shoot outs. In this day and age, and with all the killing, how can a nation allow people to buy guns so easily and freely," I said.

She nodded agreeably but the evening was not the same again.

I know from newspapers and television that 'Guns' are serious business in America, literally and figuratively. They are a major electoral issue, have huge lobbies on either side and compete with only 'God' in terms of the intensity and extent of the debate. It is also a deeply divisive issue. Obviously I had touched a sensitive subject which evokes strong reactions even in super-cool San Francisco.

"The right to bear arms is guaranteed in the American constitution and in fact is the second amendment, next only to the right to free speech, the first," said a very well dressed affluent looking elderly person. He seemed very calm but said this with such authority that I mentally labeled him as the judge. "It is a fundamental matter of our laws," he said "And no one will be able to take away the guns ever."

"But why?" I persisted. "I know a little bit about the history and the circumstances 200 years ago, when there was really no authority and each man had to defend himself and his property as he rode to the new frontiers, but today?" I asked. "Shouldn't laws change with time?"

"It is the same frontier spirit that we have still," this was from a rugged tall man who almost looked like Clint Eastwood. Unlike the judge, he was in designer jeans with a beautifully cut brown coat in velvet. "Apart from the constitutional guarantees about the right to guns, all of us in America believe that you need them for self-defense," he said equably, but I had the sensation that if I challenged this rather far-fetched notion, he may 'draw'.

"Don't be ridiculous," said the elderly lady next to him. "This is one of our stupidities. Do you know that one third of all American houses have a gun? And that we have over 200 million arms in this country, almost one for every person. And that last year 30,000 persons were killed by guns. Compare that with 50 in the UK," she said strongly and I found all the ladies nodding at her logic and a few men as well. I was frankly startled by these figures, but no one disputed them and later at home when I researched, I found that she had underestimated the prevalence of guns, if anything.

"Half of them are suicides or accidents, Martha. Don't exaggerate," said Clint with a glint in his eye.

"But killed by guns, nevertheless," she replied not accepting his classification of deaths by intention.

"Our problem is how to start disarming. The moment there is some talk of even gun licensing or control, the entrenched lobbies such as the Rifle Association jump in," said a professorial looking man, who seemed the anti-thesis of our Clint Eastwood.

"More people die in road accidents than by guns. Should we ban cars, then? Cars don't kill. Bad drivers do. Similarly, Guns don't kill. People do," said the judge.

"Don't be daft," said the lady to my side who had started it all. "That is the oldest cliché of all. It is a slogan. What about all the outrages that we see of children in school mowing down classmates, of families being destroyed in a rage. I agree with the Indian gentleman here. This is the most irrational aspect of our country," she said now impassioned.

"Let us change the subject," said the hostess. Her party was getting too contentious.

"OK. But let me just ask you this. If your family, your wife and kids are threatened would you rather have a gun and defend them or would you rather go to the police?" asked Eastwood. He was looking directly at me.

It was a bizarre question and I was uncomfortable, but he persisted: "What would you do?"

"If my family is threatened? I will go to the police, naturally," I had to say. I could not picture myself with a revolver in my hand defending my property!

"There is nothing natural about it. I would defend myself. Shoot the bastard, the intruder. Most Americans would. Guns define our identity. That and to be assertive," he said even as others looked uneasy.

"Well, to be argumentative defines the Indian identity," I said secure in the knowledge that he would not know that I was repeating Amartya Sen, "But today, this Indian will not argue this further."

The hostess looked relieved as she brought the dessert.

B S Prakash is India's Consul General in San Francisco and can be reached at cg@cgisf.org

B S Prakash
Print this article