The Bharatiya Janata Party on Tuesday said the results of Uttar Pradesh assembly elections fell below its expectations even as the party geared itself to form governments in three other states.

"We are in a position to form governments in the three states of Punjab, Goa and Uttarakhand...I am confident that this result will give strength to the BJP," party president Nitin Gadkari told reporters.

"It is a clear vote against Congress and the United Progressive Alliance, holding them guilty of corruption and inflation," he told a crowded press conference at the party headquarters in New Delhi amid bursting of crackers.

"Even Uttar Pradesh assembly poll results enhance that hope as Congress kissed defeat even in Amethi and Raibareli, and other Lok Sabha seats it won in 2009. The Samajwadi Party and Bahujan Samaj Party have not much relevance in the national scenario," Gadkari said.

The BJP leader attributed the stunning victory of the Samajwadi Party in Uttar Pradesh to polarisation of votes since people thought it was the best option to oust Mayawati.

Though the Uttarakhand results were not out when he met reporters, Gadkari said the party will win 32 to 33 seats and it will cover up the deficit three or four seats for a majority in the 70-member house with independents and regional party Uttarakhand Kranti Dal to remain in power. That was his calculation when asked if the BJP will take support of the Bahujan Samaj Party.

He attributed the BJP's victory in Goa to the Congress-led government's rampant corruption and took pride in pointing out that the results remove the anti-minority tag on it by winning the Christian-dominated seats. He also pointed out that the BJP fielded six Christians and backed an independent Christian candidate to remove that tag and all of them won.

Though the party won less seats in Punjab compared to 2007, Gadkari said Punjab has set a new history of renewing trust in the ruling coalition of the Akali Dal-BJP for the first time, as otherwise the state always voted alternatively one or the other party.

Gadkari said his first priority was the Rajya Sabha polls for 52 seats and the Delhi civic polls next month.

"The UP results are a definite "red alarm" for the Congress because even after the exit polls were out, the party still claimed that it was coming to power," Gadkari said.

The BJP leader also wondered how the Congress would overcome the damage done to its heir apparent, Rahul Gandhi, who had made this election a personal prestige issue.

A Correspondent in New Delhi
Related News: Bharatiya Janata Party, Uttar Pradesh, Nitin Gadkari, Punjab, Congress
Print this article
Punjab: Warhorse Badal beats anti-incumbency, to be CM
Maya's statues, elephants not to be pulled down in SP wave
Poll debacle: Time for a change of guard at the Centre? 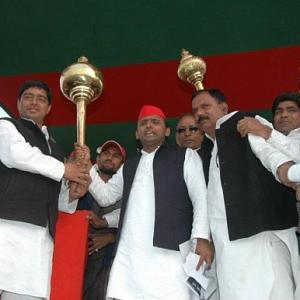