Accusing successive governments under Bahujan Samaj Party, Samajwadi Party and Bharatiya Janata Party in Uttar Pradesh of plundering public money, Rahul Gandhi on Saturday hit out at these parties for "lacking vision" for the state's development and their "mistrust" of Centre's "pro-poor" policies.

"I am aghast that none of these parties appear to have a vision for state's development. All of them build their support base on caste and communal line and reduced politics to a narrow agenda," Gandhi said addressing an election rally in Bara, 5 km from Allahabad.

The Congress general secretary alleged that whenever the UPA took an important step towards fulfilling the promise to common man, the NDA came up with "strange" query "where will the money come from", while BSP supremo Mayawati sought to cynically dismissed the step as "drama".

"We are unfazed by the opposition's charge that we are staging a drama. We are resolutely going to enact what they are bound to describe as the biggest drama and that it the Food Security Bill, which would eradicate the problem of hunger," he said.

He took pot-shot at Samajwadi Party's promise of providing free laptops to students and claimed that the people of the state will not be fooled by those whose regime has been marked by lawlessness and have been in the habit of "promising the impossible" whenever elections are round the corner.

In a hard hitting speech, Gandhi recalled that the Congress led UPA had come to power in 2004 with the promise of removing the plight of the common man at a time when the NDA after having remained in power for six years was smugly declaring "India Shining".

Gandhi said he would continue his fight till he succeeded in ensuring that "those who till the fields do not stay hungry".

He lamented that in past 22 years, during which UP has been ruled by BJP, BSP and SP, the state has witnessed at "a snail pace and suffered plunder of public money by successive governments".

He came down heavily upon Mayawati government in the state and alleged that thousands of crores of rupees, which came to UP for MNREGA project, waiver of farmers loan and special package for Bundelkhand region have been embezzled by those in power.

Gandhi also took a dig at Samajwadi Party as its manifesto released on Friday promised laptops to students.

"Just have a look at their manifesto for the previous assembly election. Proficiency in computer and English was declared a taboo by the party leadership then."

He said, "Interestingly, this was the party's stand despite the fact that Mulayam Singh Yadav's son Akhilesh is fond of these symbols of modernity. It seems the party has taken a U-turn in 2012 and come up with promises which it will never be able to fulfil."

Gandhi also alleged that the state witnessed a spurt in criminal activities during SP regime. "Whenever SP comes to power, the Goonda element control police station," he added.

After addressing the rally, Gandhi flew off to Sonebhadra district where he is expected to address the last rally of his ongoing phase of electioneering in the state. 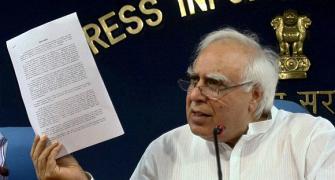 'Chidambaram a valued colleague, NDA trying to malign him'
UPA ministers arrogant, difficult to talk: Jaitley
Exclusive: 'Rahul's charm is fading in UP'