Not a puppet of BJP leadership, says Gadkari

Bharatiya Janata Party president Nitin Gadkari has denied he is an RSS appointee and asserted that he was taking his own decisions -- though often after consulting senior party and Sangh leaders -- and that he was not "puppet" in the hands of the Central leadership.

"Last four years as the president of BJP in Maharashtra, RSS is part of my life conviction. But RSS leaders never direct me, never give me any instruction. And even as BJP president, I am taking my own decisions," Gadkari told Karan Thapar in an interview for CNN-IBN.

He insisted that senior BJP leader L K Advani and his predecessor Rajnath Singh were the first to suggest that he should become BJP president. He denied that RSS chief Mohan Bhagwat had imposed him on the BJP.

"Some people there are keeping this image that RSS is controlling BJP. This is not the correct thing... They (RSS) never interfere in our day-to-day activities, never interfere in the selection of candidates and politics," Gadkari said.

However, Gadkari maintained that BJP and RSS have an "ideological relationship" and the party often discusses issues with the latter.

On whether BJP had become the front organisation of RSS, Gadkari said this perception was due to the gap between image and reality.

Asked if BJP could reject an advice given by RSS, Gadkari said, "Yes, many times. There is democracy in RSS. Even when I go to the highest leader in the RSS, I can discuss with him and exchange with him that this is my opinion. When there is a decision of RSS regarding its matters, every RSS swayamsewak is ready to accept that."

The BJP president described Bhagwat and former RSS chief K S Sudarshan as a democratic leader with whom he discussed issues often and had differences on several occasions. Gadkari said as BJP president he could follow his path.

On a question about BJP being identified with Kandhamal riots in Orissa, Ram Sene in Karnataka and Varun Gandhi's alleged communal speech, Gadkari said, "We are a democratic party. We are many leaders in the party having different views."

He argued that these did not represent the views of the party. "As far as Ram Sene is concerned, it is not directly or indirectly related with BJP. It is a section of the people, they decide that they want to attach everything with BJP," he said.

Gadkari asserted that though he was new to Delhi politics, he had the full cooperation of the senior leaders and will be "100 per cent successful to get a good position" for his party.

On the issue of cooperation from the four senior leaders -- Sushma Swaraj, Arun Jaitley, M Venkaiah Naidu and Ananth Kumar -- Gadkari said, "They are supporting me from the core of their heart and they have guided me very properly. Taking all precaution about my activity, and they are supporting me."

Gadkari, who has confessed to being new to Central politics, denied that these senior leaders were turning him into a puppet.
"Not at all they have such type of intention. And the people who know me know that I will never become a puppet. I can make bonafide mistakes but I cannot make malafide mistakes," he said.

Striking a positive note, Gadkari said he aimed to increase BJP's vote share by 10 per cent to take on Congress.

"We have to concentrate on SC, ST, minorities and unorganized sector labours. If we concentrate on this, we can increase some percentage of votes," he said.

Gadkari said BJP would strive to work on Antyodaya thinking of Deen Dayal Upadhyaya to serve the last man in the queue.
He defended Hindutva as "a way of life" and one which is "related with cultural nationalism".

Gadkari defended dissent in the state units in Rajasthan, Bihar, Karnataka and Uttarakhand, saying BJP was a democratic party and so was different from other parties.

He maintained that after he became president of the party, the problem in the Rajasthan unit was solved.

He reiterated that party issues should be discussed only on party platforms. "One thing which I learnt from it, the lesson, is don't talk the issue directly to the press," he said.

Gadkari claimed 99 per cent of the problem in Rajasthan had been solved. 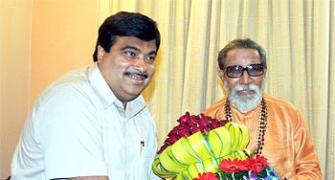 'Gadkari's nomination may lead to revolt in BJP'