'I am afraid the condemnation of mob attacks is a case of too little too little.'
'Much sterner action is needed,' BJP MP Shatrughan Sinha tells Subhash K Jha. 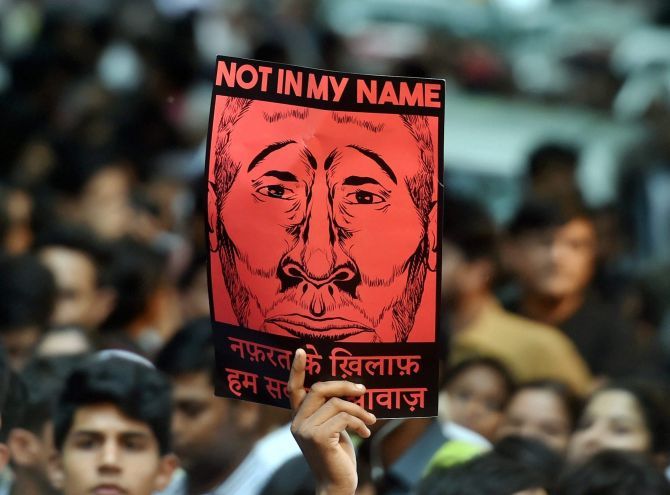 Shatrughan Sinha, the most outspoken soldier of the ruling regime in New Delhi, is shattered by the spate of mob lynchings across the country.

"I strongly condemn the lack of urgent and immediate police action against mobs who pick on individuals," the Bharatiya Janata Party MP from Patna Saheb in Bihar says.

"This is a new trend and it is spreading all across the country. If we don't control it now, we would soon be staring in the face of utter chaos with the mobs deciding what we should eat and what we should wear."

Without naming Prime Minister Narendra Modi, Sinha feels there must be stronger action against mob attacks.

"I am afraid the condemnation of mob attacks is a case of too little too little. Much sterner action is needed."

Sinha says he is a proud Hindu, but the lynch mobs have deeply mortified him.

"We are all Indians first, then Hindus or Muslims," Sinha says.

"The hapless Muslim boy Junaid who was lynched on a train on the eve of Eid was also Indian. What crime had he committed? Who decides what is the correct way for an Indian to eat or behave?"

"First protect the cows from hunger and homelessness," says Sinha. "Then protect them from beef eaters."

"Cows are so mercilessly neglected in our country. We have left cows to die on the roads. They eat plastic bags and die. Rather than pretend to protect cows from beef eaters, let the gau rakshaks protect cows from hunger and homelessness."

Never one to mince words, Sinha wonders when goons and self-appointed moralists will decide what we should eat and wear.

"Why should we be told what to eat and what to wear?" the MP asks. "Are we not responsible citizens? It is time strict laws were implemented against the mob mentality. Otherwise, our democracy is heading towards mobocracy."

"We are wasting our time on non-issues," he says, adding, "There is China getting more aggressive. There is Pakistan killing and mutilating our jawaans. There is rape and violence against women and children. And we are concerned with people's food habits."

'And look at the example our politicians are setting! One of them has been caught on camera urinating in public. Just the other day, a young man was lynched when he tried to stop public urination."

"If public figures spread the wrong message, how can we control mob mentality?" Sinha, who served as health minister in the Atal Bihar Vajpayee Cabinet, asked.

"I've always considered our prime mnister the biggest action hero of our country," says Sinha. "It is time for him to take firm and swift action against those who take the law into their own hands."

"The lynching mobs represent neither the BJP nor India. They represent only the hooligan class."

IMAGE: The silent 'Not in My Name' protest against the lynchings across India, at Jantar Mantar, New Delhi, June 28, 2017. Photograph: Shahbaz Khan/PTI Photo 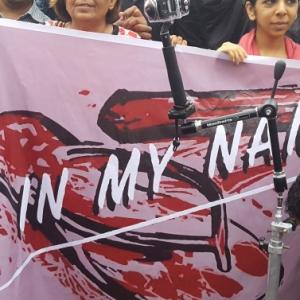