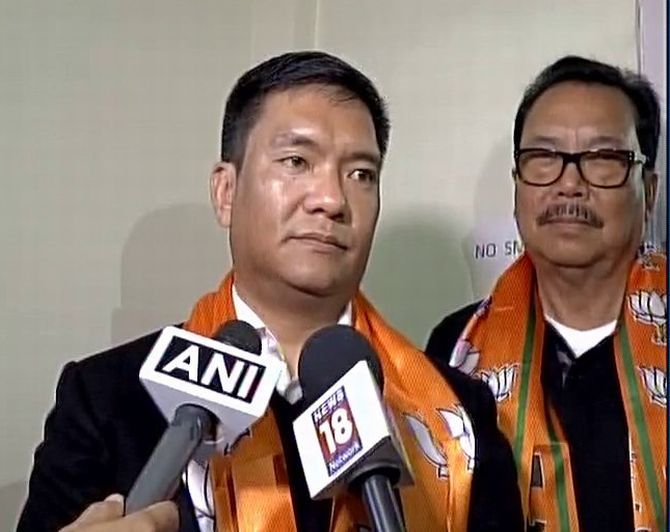 A Bharatiya Janata Party government was installed in Arunachal Pradesh on Saturday after 33, out of 43 Peoples’ Party of Arunachal members of legislative assembly led by Chief Minister Pema Khandu, joined the saffron brigade in this politically fragile state.

The PPA, an alliance partner of the North East Democratic Alliance government in the state, on Friday selected Takam Pario as the new chief minister of the state.

However, the political equation changed when majority of the PPA MLAs who initially extended support to Pario, later shifted their allegiance to Khandu.

“Lotus has finally bloomed in Arunachal. The people of the state will see a new dawn of development in the new year under the new government,” Khandu told reporters in the assembly premises.

Elaborating on the decision to merge with the BJP, the chief minister said that circumstances compelled the MLAs to take the decision in the interest of the people and the state.

“After several years of Congress misrule we observed that there was no visible development in the state. We joined the PPA with the intention to take the state to progress and prosperity, but there too, we find similar condition where the party president treated the MLAs undemocratically.

“So with focus on development, our MLAs decided to join the BJP for overall progress of the state,” the chief minister said.

Terming the decision of the PPA president to suspend the MLAs as ‘undemocratic’, Khandu said that before such a move the party leadership should have issued show cause notice to the MLAs.

“There was no significant development in the state since last year due to political turmoil, but now with the NDA (National Democratic Alliance) government at the Centre, the state will witness a sea change in the coming years,” Khandu said adding, ‘the decision to join the BJP is a blessing in disguise for the people and the state’.

“Until and unless there is stability in the government, no development could take place. There will be no more dissident politics and we shall now only focus on development,” Khandu asserted.

When asked about the court case filed by Arunachal Pradesh Congress Committee president Padi Richo against the joining of Congress MLAs with PPA which is pending with the Gauhati High court and which would be taken up on January 7 next, Khandu said that the joining was done in accordance to the Constitution.

Khandu said that he had written a letter to the state governor for dropping of Takam Pario, Tanga Byaling and Rajesh Tacho from the council of ministers.

On allegation by PPA president that BJP hijacked its candidate Dasanglu Pul in November 19 bye-poll to Anjaw constituency, the chief minister denied the charge and said that after discussion with BJP and PPA before the election, Pul was selected as the consensus NEDA candidate from BJP ticket.

Responding to a query whether PPA would continue to remain as an alliance partner of the BJP-led NEDA, BJP state President Tapir Gao said that the matter would be discussed with NEDA convenor Himanta Biswa Sarma after he returned from Kenya on January 3 next.

When asked whether the party would welcome the remaining 10 PPA MLAs if they desired to join, Khandu said that he had no authority to take any decision.

Khandu broke away from the Congress along with 42 lawmakers in September this year.

The border state has been struggling with political instability since last December when Congress dissidents revolted against former Chief Minister Nabam Tuki.

After a series of dramatic developments, which included a special session held at a hotel to vote out the chief minister, Congress rebel Kalikho Pul became chief minister in February with the help of 11 BJP lawmakers.

The Congress moved the Supreme Court, which turned the clock back and restored Tuki's government. But Tuki was out within days as he did not enjoy a majority in the 60-member assembly.

Pul, who insisted that he should be reinstated as chief minister, was left alone at the last minute when the lawmakers supposedly backing him shifted their loyalties to Khandu.

Pul committed suicide in August and a month later, Khandu walked out of the Congress with 42 lawmakers and joined the PPA. With the new development, the strength of BJP legislators in the 60-member House rose to 47 MLAs including one associate member and an independent while, the PPA has ten MLAs and Congress three.

The People’s Party of Arunachal on Saturday accused the Bharatiya Janata Party of hijacking its MLAs to instal its government in the state, after Chief Minister Pema Khandu joined the saffron party with 32 MLAs.

PPA is a partner of the NEDA.

“The NEDA convenor instead of coming to the state to resolve the ongoing crisis went to Kenya. He should have deputed somebody to sort out the differences between the MLAs of the party,” Bengia said.

“The PPA is not comfortable with NEDA in the state and we are going to discuss the issue with other constituent members of the alliance soon,” PPA central working committee chairman Kamen Ringu said while supporting Bengia.

Criticising the BJP for its ‘conspiracy’ to dislodge the PPA-led NEDA government in state and to instal a full-fledged BJP government, Bengia alleged that the party even hijacked the PPA candidate for the November 19 by-poll to Hayuliang assembly constituency and forced her to contest from a BJP ticket.

“Most of the MLAs treat PPA as a ‘transit camp’. We’ll not allow it any more. We’ll try to strengthen the lone regional party of the state and will come out strong in the 2019 elections,” Bengia said.

“Most of the leaders are not to lead the state but to loot,” Bengia said, adding that the party had enough legal aspects to teach lessons to those who had been maintaining equal relation with PPA as well as the BJP.