The Bharatiya Janata Party's central leadership in Delhi has invited the feuding factions in Karnataka for a meeting on Sunday.

The meeting, scheduled for 8.30 pm, is likely to be delayed as Shobha is yet to reach New Delhi.

Meanwhile, a meeting of BJP leaders convened by state party president K S Eshwarappa to defuse the crisis turned out to be a damp squib. Only 8 Members of Legislative Assembly attended that meeting while the Yeddyurappa faction boycotted it.

Yeddyurappa has continued to step up the pressure against his own party. Despite stern warnings from senior leaders, he has continued to press for a leadership change and better cabinet berths for his loyalists.

Earlier during the day, senior BJP leader Venkaiah Naidu had warned Yeddyurappa not to wash his dirty linen in public.

Gowda, however, continued to downplay the crisis and stated that he had not received any resignations.

Yeddyurappa retorted that the resignations of all the disgruntled legislators are with him and he would act on them at an appropriate time. 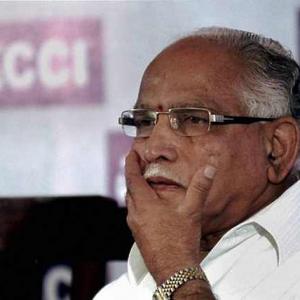