Amitabh Kumar Das, a senior IPS officer of Bihar cadre, who is deployed by the Election Commission of India as an observer in the upcoming Gujarat assembly polls, has accused the National Democratic Alliance government in Bihar for putting pressure on him not to take action against leaders of the ruling BJP in Gujarat for violation of model code of conduct.

Das has alleged that Bihar government has ordered to reduce his salary for two years in a decade-old case of theft of National Savings Certificates and Kisan Vikas Patras from the Patna railway station.

"Bihar government's action against me is politically motivated to put pressure on me not to take action against leaders violating model code of conduct in Gujarat assembly polls as I am deployed as observer by the EC," Das said in Patna on Friday.

Das said that he will challenge the Bihar government's act in a court because he was given a clean chit by the departmental inquiry into the case.

"I will challenge it in court. It is a politically motivated act to put pressure on me," he said.

"But I won't come under any pressure and will take action against the violators to ensure free and fair elections in Gujarat," he added.

Known as an honest police officer, Das, who is currently posted as the Railways superintendent of police in Bihar's Maoist-affected Munger district, has been in news more for locking horns with political leaders for some reason or the other.

Interestingly, while most of his batch-mates have been promoted to the rank of deputy inspector general, Das is still cooling heels as an SP.

Last year a division bench of the Central Administrative Tribunal has quashed the departmental proceedings initiated by the Bihar government against him in another case. "But I was given a clean chit by the conducting officer as no charges
were proved against me," he said.

Amitabh Kumar Das had moved the CAT against the state government's order to initiate departmental proceedings against him.

He told the CAT that Bihar Chief Minister Nitish Kumar had grudges against him.

"I had worked as a whistleblower and exposed scams in the railways when I was posted as the superintendent of rail police in Patna during 2001 to 2003. Contracts worth several crores were awarded to notorious criminals during Nitish Kumar's tenure as the Union railway minister," Das told the CAT then. 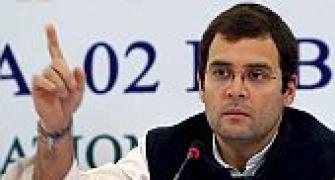 No buyers in Congress for Rahul's 'ekla chalo' funda

Telcos to be chargesheeted for excess spectrum during NDA