The first phase of polling for the Bihar assembly elections passed off peacefully on Wednesday as an estimated 54.26 per cent of nearly 2.15 crore eligible voters exercised their franchise, marginally lower than in 2015, as the coronavirus scare failed to impact the turnout. 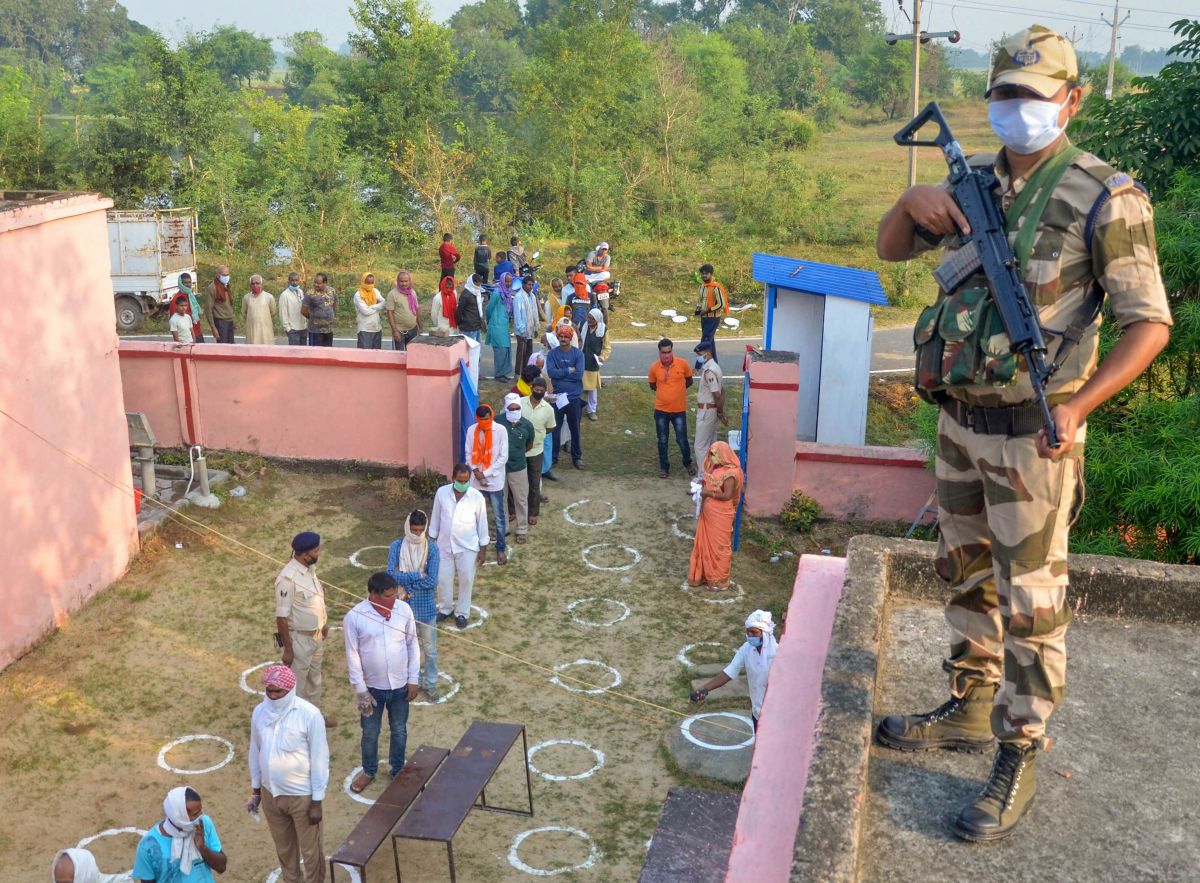 IMAGE: Voters, adhering to social distancing norms, stand in a queue to cast their votes for the first phase of Bihar assembly election at Alipur block in Kaimur district. Photograph: PTI Photo

The polls were held in 71 constituencies spread across 16 districts amid tight security and strict COVID-19 regulations in place.

According to the Election Commission's Voter Turnout App, the provisional polling percentage was 54.26 that was updated till 10 pm.

The Chief Electoral Officer's office said in Patna that the voter turnout in the 2015 election in these 16 districts was 54.75 per cent.

Chief Election Commissioner Sunil Arora said in Delhi that the voter turnout in phase one was 54.94 per cent in the 2015 assembly polls, while in the 2019 Lok Sabha elections the corresponding figure was 53.54 per cent.

This was the first major poll held in the country amid the raging COVID-19 pandemic and the poll time increased by an hour till 6 pm to allow suspected or confirmed coronavirus patients to vote in the last hour.

Polling went beyond 6 pm in some constituencies, while the voting hours were curtailed in Naxal-affected areas and ended at 4 pm after beginning at 7 am.

Out of the 16 districts which went to polls, 12 are hit by Left-wing extremism, a senior poll panel official said. 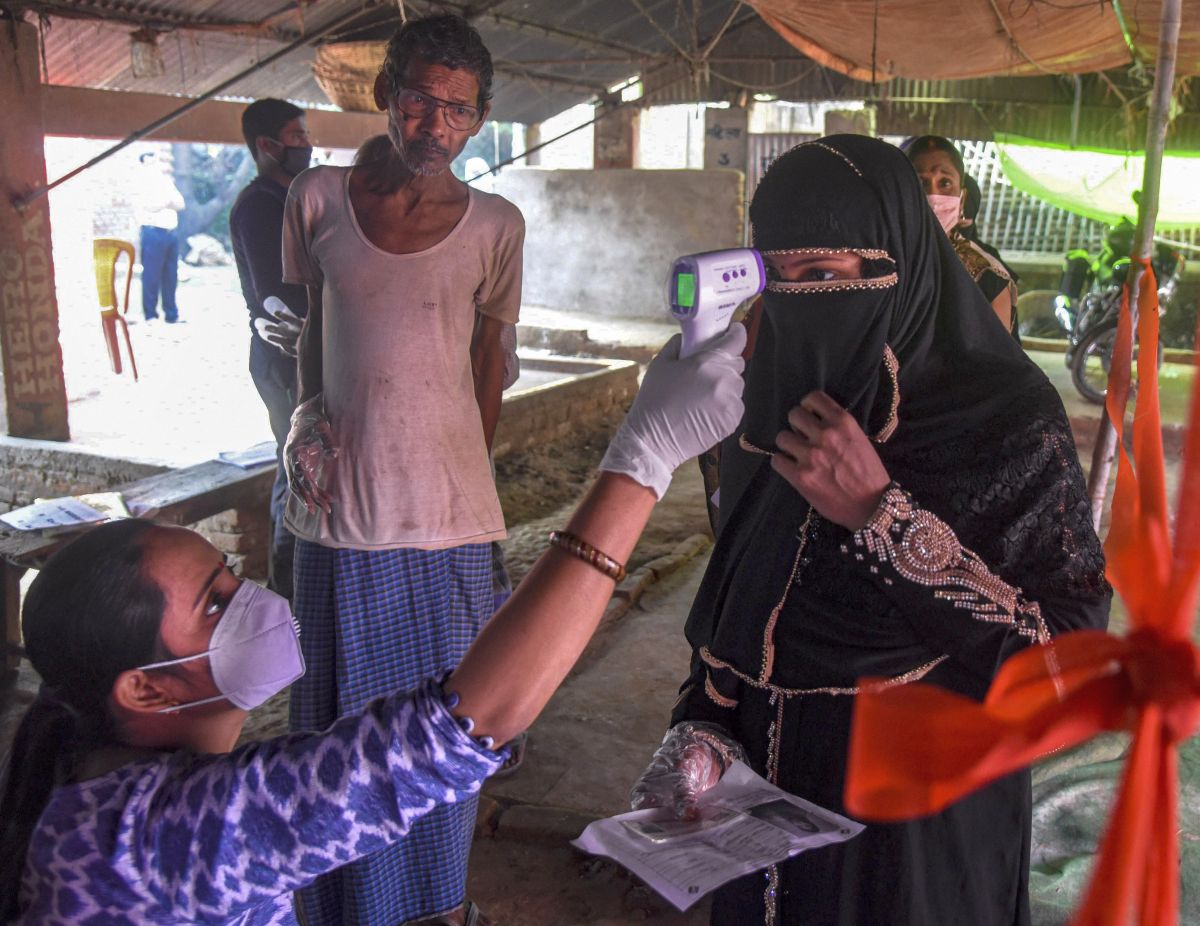 "And out of the 12, four are considered as extreme Left-Wing affected," the official said in Delhi, expressing satisfaction at the smooth conduct of the exercise.

Of the nearly 2.15 crore electors eligible to exercise the franchise, 1.12 crore were male, 1.01 crore female and 599 were categorised as third gender, according to data provided by the Election Commission.

As many as 1,066 candidates are in the fray in the first phase of the poll.

Deputy Election Commissioner in-charge of EVMs said in Delhi that the functioning of electronic voting machines was "very satisfactory" during the polling. IMAGE:  Voters show their identity cards as they stand in queues at a polling station to cast their votes. Photograph: PTI Photo

In 12 polling stations of Jamui, the poll timing was increased by one hour due to the delay in replacing the faulty machines, he said.

One control unit and at least one ballot unit makes for one EVM.

Across all 16 districts that went to poll on Wednesday, voters were seen queuing up at polling stations since early morning and COVID-19 norms were largely followed with people wearing masks and maintaining a safe distance from each other.

At a polling station in Jalpura village of Bhojpur district, there were not many voters around 3.15 pm when a PTI reporter went to cast his ballot, but plastic hand gloves were strewn all around, used and discarded by electors. 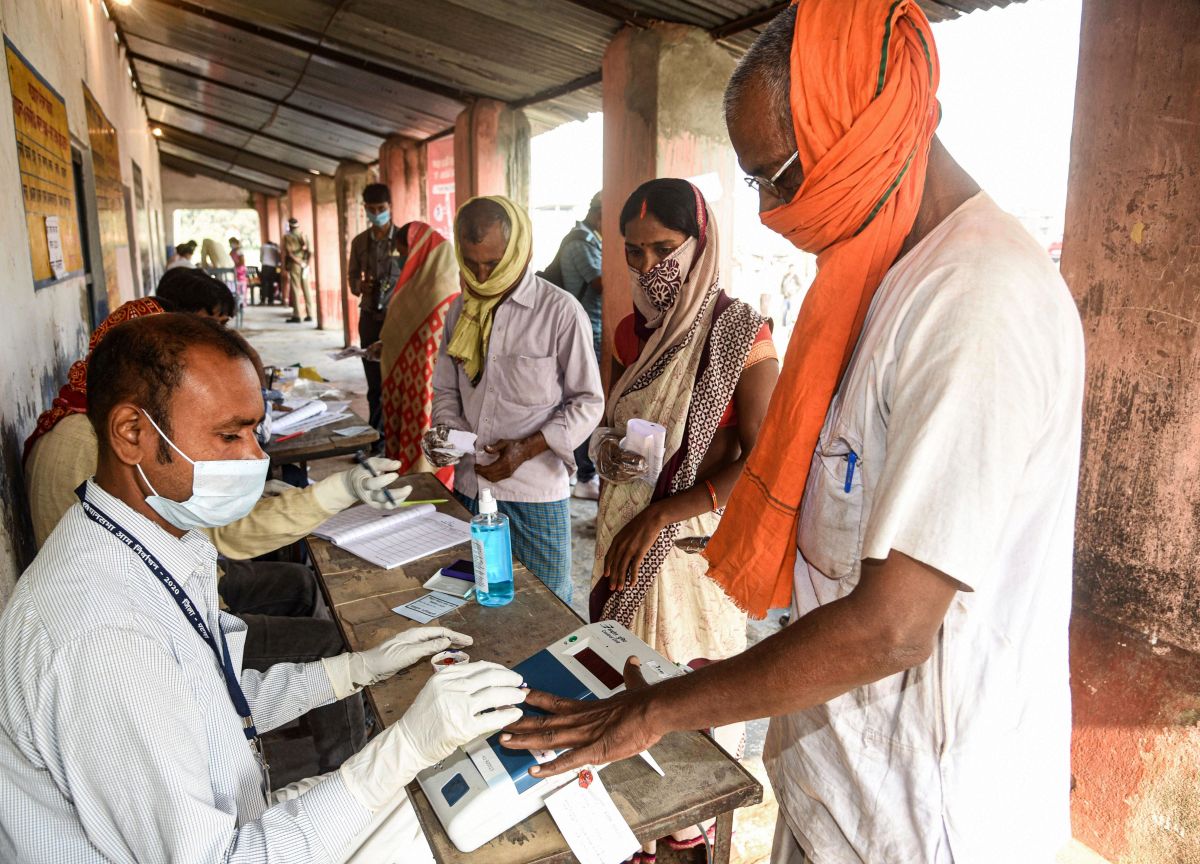 IMAGE: Polling officials mark the fingers of voters with indelible ink at a polling station before they cast their votes for the first phase Bihar polls at Naubatpur in Patna. Photograph: PTI Photo

Hand sanitisers were kept at the entrance and the exit gates of the booth. Some people, however, were seen without a face mask.

"We have hand gloves, but some people are refusing to wear," said Angad Kumar, the presiding officer of one of the four booths at the polling station.

They said Singh complained of severe heart pain and was rushed to the Sadar Hospital where doctors declared him dead.

As many as 159 people were detained as a preventive measure during the polling, the election panel said.