India on Wednesday welcomed the listing of Jaish-e-Mohammed chief Masood Azhar as a global terrorist by the United Nations with Prime Minister Narendra Modi describing it as a "big success" for the country's efforts to root out terrorism. 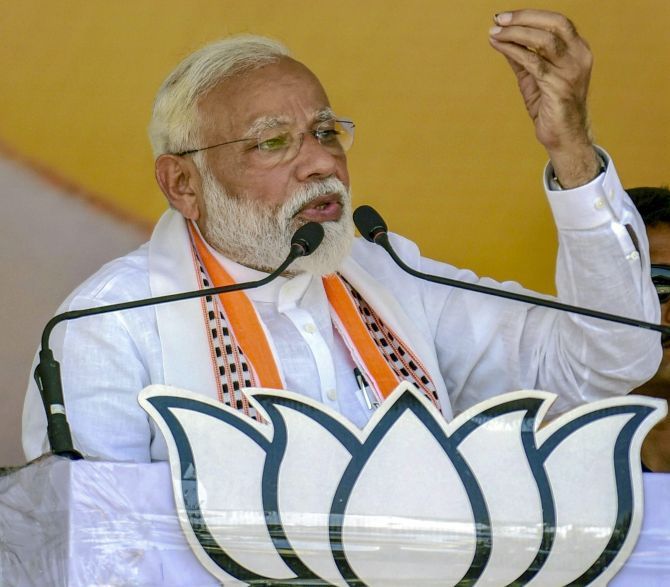 Political parties cutting across ideological divide as well as strategic affairs experts also hailed the UN action against the Pakistan-based Azhar, nearly a decade after India first pushed for banning the terrorist, who is the mastermind of several major terror strikes in India.

"It is a big success for India's efforts to root out terrorism... India's voice is being heard globally. India's views cannot be ignored any longer, it has been proved," Modi said an election rally in Jaipur.

In its reaction, the external affairs ministry called Azhar's designation as a UN proscribed terrorist as a step in the right direction to demonstrate the international community's resolve to fight against terrorism and its enablers.

The UN Sanctions Committee on Wednesday designated Azhar as a global terrorist after China lifted its hold on a proposal to ban him.

Bharatiya Janata Party president Amit Shah and several other party leaders credited Modi for Azhar's listing while the Congress noted its "disappointment" over no mention of JeM chief's role in the Pulwama terror attack in the UN resolution.

Shah said Modi's diplomatic efforts led to the United Nation's decision as he pitched for his "strong and decisive" leadership.

"That is why India needs a strong & decisive leader. Grateful to PM Narendra Modi and his diplomatic efforts that led to the UN designating Masood Azhar as a global terrorist. It was long over due. This also reflects PM Modi's commitment towards Zero tolerance against terrorism," Shah tweeted.

Congress spokesperson Randeep Singh Surjewala said it was a welcome step but added that the opposition party was disappointed that the UN listing does not mention the Pulwama terror attack, in which 40 CRPF personnel lost their lives, and has no reference to Jammu and Kashmir.

"Pakistan based Masood Azhar's belated declaration as a global terrorist by UN is surely a welcome step. India's fight against terrorism is resolute. We are disappointed that UN listing doesn't mention Pulwama/J&K while listing Azhar's role in terrorist activities," he tweeted.

Former Jammu and Kashmir chief minister Omar Abdullah alleged that the sacrifices of CRPF men were sold down the river for a symbolic win.

"No mention of terror in Kashmir & no mention of Pulwama. It's amazing how quickly the sacrifices of the CRPF men were sold down the river to get a symbolic win," he said.

Samajwadi Party president Akhilesh Yadav congratulated the Indian diplomatic corp for the tireless work that led to this "significant victory".

"We demand Pakistan immediately arrest him, freeze his assets and shutdown all organisations linked to him," he said.

France, the UK and the US had moved a fresh proposal to declare Azhar as a global terrorist by the UN in the wake of the Pulwama terror attack in February. The JeM had claimed responsibility for the Pulwama attack.

However, China put a technical hold on the proposal, blocking it for the fourth time to designate Azhar. The Chinese move was termed "disappointing" by India. On Wednesday, China lifted its hold from the proposal.

A UNSC designation will subject Azhar to an assets freeze, travel ban and an arms embargo. An assets freeze under the sanctions committee requires that all states freeze without delay the funds and other financial assets or economic resources of designated individuals and entities.

"This is in accordance with India's position and in line with the information that India has shared with the members of the Sanctions Committee regarding terrorist activities of Masood Azhar and the Jaish-e-Mohammed," MEA Spokesperson Raveesh Kumar said.

"India will continue with its efforts through international forums to ensure that terrorist organisations and their leaders who cause harm to our citizens are brought to justice," he added.

In 2009, India first moved a proposal by itself to designate Azhar. In 2016 again India moved the proposal with the P3 - the United States, the United Kingdom and France in the UN's 1267 Sanctions Committee to ban Azhar, also the mastermind of the attack on the air base in Pathankot in January, 2016.

In 2017, the P3 nations moved a similar proposal again. However, on all occasions China, a veto-wielding permanent member of the UN Security Council, blocked India's proposal from being adopted by the Sanctions Committee.