News
Business
Movies
Sports
Cricket
Get Ahead
Money Tips
Shopping
Sign in  |  Create a Rediffmail account
Rediff.com  » News » Be ready to do 'bhangra' when I return: Chisti to Pakistan

Be ready to do 'bhangra' when I return: Chisti to Pakistan

Source: PTI
May 10, 2012 15:06 IST
Having been granted permission by the Supreme Court to return to Pakistan, an elated Khalil Chishti, who is serving life term in a 20-year-old murder case in Rajasthan, on Thursday asked everyone back home to be ready to do the bhangra.

"I will be very happy when I come to Pakistan. Everyone should prepare to do the bhangra," the 82-year-old microbiologist told Geo News channel on the phone after the SC allowed him to visit Pakistan for a temporary stay, subject to certain conditions.

Asked how he was feeling, he replied: "My health is fine. I am a heart patient and this excitement is (not good for me) but I will not let it affect my heart."

Chishti said the first person he wants to meet on his return is his elder brother. "I have not met him for about 20 years. I want to go and offer my salaam to him," he said.

He said he was not aware of the court's order as he was not present during Thursday's hearing but he expected to leave for Pakistan in five to 10 days.

His comments came after a bench of justices P Sathasivam and J Chelameswar said Chishti shall deposit his passport at the Indian High Commission in Pakistan and furnish as security Rs 5 lakh in cash within two weeks before the SC registry.

The apex court directed that Chishti shall return to India by November 1, as it has decided to expedite the hearing of the appeal filed by him challenging his conviction in a murder case in Rajasthan.

The family of the Pakistani microbiologist expressed happiness at the SC allowing him to return home on humanitarian grounds.

Chishti's daughter Shoha told the media that the family had been offering special prayers after hearing of the Indian court's order and preparing to welcome him.

"Everyone is obviously very happy. Everyone is thanking Allah and my mother has offered special prayers of thanksgiving. There is a lot of excitement. We want him to come to Pakistan as soon as possible," an emotional Shoha said.

She said there were "some legal matters" that have to be sorted out before her father's return. "Our lawyer will guide us about his bail and the bond to be submitted. We are hoping he will come soon," she said.

Chishti has been ailing and is unable to walk without help.

Earlier on May 4, the SC had agreed to hear Chishti's plea to visit his country and had sought the Centre's response to it.

Chishti had been granted bail by the apex court on April 9. Held guilty in a 20-year-old murder case, he had been serving life term in a Rajasthan's Ajmer jail.

The apex court had granted bail to Chishti on humanitarian grounds, but had asked him not to leave Ajmer till further orders.

Zardari had also taken up the issue of Chishti with Dr Singh during a meeting in New Delhi on April 8. He met the PM over lunch while on a daylong private visit to India. 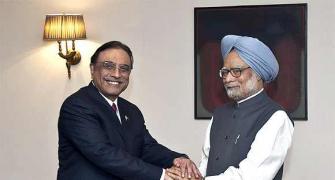