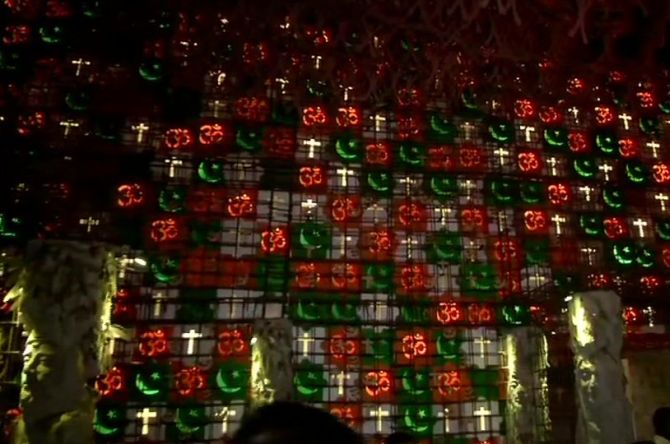 A Kolkata Durga Puja committee, with a senior Trinamool Congress leader as its patron, has courted controversy by playing azaan along with Sanskrit hymns as the theme music of the festivities, drawing threat of legal action.

The organisers, however, remained unfazed, insisting it was in line with the 'communal harmony' theme chosen by the committee for this year's puja.

Some of the visitors complained that Azaan, the Muslim call to prayer made from a mosque, is heard in the background along with Sanskrit hymns inside the marquee at the north Kolkata puja.

The puja committee, however, defended its decision, saying it was done as the theme of the community puja was communal harmony.

Santanu Singha, a Calcutta high court lawyer, said he filed a complaint at Beleghata police station on Friday accusing the organisers of 'disturbing peace and tranquility' in West Bengal by allowing azaan at a Durga Puja Pandal.

Police, however, said it is yet to receive a complaint.

"I was shocked to find azaan being played every 10-15 minutes inside the puja pandal. They are saying the theme is communal harmony. What kind of communal harmony are they preaching by hurting the sentiments of Hindus during Durga Puja?" Singha said on Monday.

Singha said he has decided to move court against the organisers.

A video, which showed some visitors expressing dismay over azaan being played at the puja pandal, has gone viral.

The chief patron of the puja committee, TMC MLA Paresh Pal, said the theme of the puja is 'Amra Ek, Eka Noi' (We are one, not alone), and apart from azaan, the 'Om' mantra is also being played as part of the theme song which says that all religions talk about the same thing, seeking God.

"In the name of puja theme, can we actually play with the theme of Durga Puja, play with our religion. An FIR has been filed at Phoolbagan police station and, if needed, we will take the legal route against Paresh Pal and his associates," Singh said.

Paresh Pal, on the other hand, said the puja pandal has motifs of temple, church and mosque to project the spirit of inclusiveness.

"The puja pandal has motifs of a temple, a church and a mosque to project the same spirit....of our inclusiveness. We have endeavoured to show that humanity is above barriers, in our decoration and theme song," Pal said.

Asserting that the puja committee 'will not be intimidated by any organisation or individual', Pal said, "Let them file an FIR or take the legal route. We will fight it
out."

"Doesn't a Hindu attend an Iftar party hosted by a Muslim? Does a Muslim shy away from Vijaya Dasami celebrations? Bengal has always believed in togetherness...we
celebrate festivals together. Our puja reflects that theme and those having no idea of Bengal's Durga Puja are now spreading the message of hatred," he said. 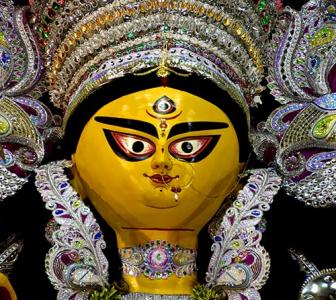 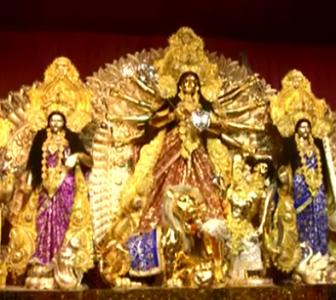 This Durga idol is made from 50 kg gold In Pics: How our readers are celebrating Navratri