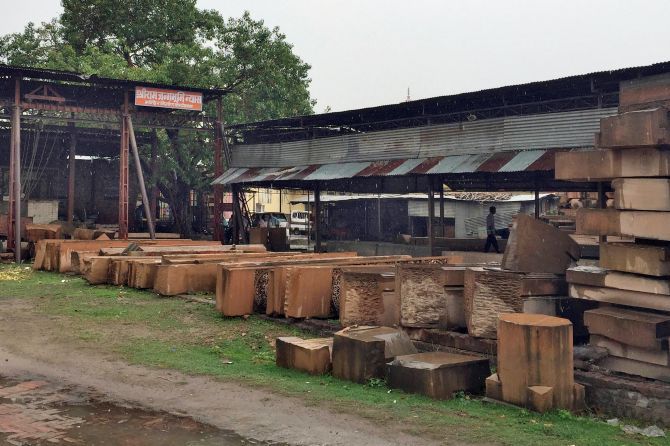 The Archeological Survey of India (ASI) report of 2003 on the Ram Janmabhoomi-Babri Masjid site was not an 'ordinary opinion' as the archaeologists were acting on behalf of the Allahabad high court to give their views on the excavated materials, the Supreme Court said on Friday.

The high court, through its court-commissioner, had asked ASI in 2002 to excavate the site and give its findings on whether the 'disputed building' was constructed on the site of an 'alleged Hindu temple' after demolishing it.

The ASI, which had found artefacts, idols, pillars and other remains, stated in its report about the existence of a massive structure beneath the 'alleged Babri Masjid'.

On being told by a counsel for the Muslim parties that the ASI report was 'merely an opinion' and not binding on the court, a five-judge Constitution bench headed by Chief Justice Ranjan Gogoi said the inferences from the report were drawn by 'cultivated and studied minds' (archeological experts).

"You (lawyer) cannot equate the (court) Commissioner's report to any other ordinary opinion. They (ASI experts) conducted it (excavation) after the Commissioner asked them," said the bench, which also comprised Justices S A Bobde, D Y Chandrachud, Ashok Bhushan and S Abdul Nazeer.

The bench said the experts excavated and analysed the materials at the direction of the Commissioner who was delegated the powers by the high court.

The top court said it was conscious of the fact that both sides have their arguments based on inferences and there were no eyewitnesses to these events.

"We are conscious of that. We have to see which side's story is reasonably probable," the bench said on the 33rd day of the hearing in the politically sensitive case.

Senior advocate Meenakshi Arora, appearing for the Sunni Wakf Board and others, said the ASI report was a 'weak evidence' and merely 'an opinion' which needed to be supported by substantial proof to establish that a Ram temple already existed at the disputed site.

"This (ASI report) is just an opinion and no definitive conclusion can be drawn from it," she said.

Arora said archeologists were asked to give their report as to whether Ram temple existed at the site or not.

"At the highest the structure was akin to a north Indian temple," she said referring to the report's conclusions.

She also stated that at some place in the ASI report it has been said the Ram Chabutra in the outer courtyard was probably a water tank.

"There are a lot of assumptions and presumptions in this report and the court is not bound to accept it which is advisory in nature and amounted to just an opinion," she said.

Referring to the provisions of the Evidence Act, she said that there was a distinction between the opinion and experts' evidence and submitted that the ASI may be the 'expert of the field', but its report was just an 'opinion' and needed corroboration.

Arora said the views of archeological experts were akin to opinions of hand-writing experts which may vary from person to person and such reports cannot be taken as sole evidence.

Another senior advocate Shekhar Naphade also appearing for the Muslim parties, advanced his arguments on legal principles of 'res judicata'.

This principle under the civil law deals with the fact that a same nature of dispute cannot be adjudicated upon twice in a court of law.

Naphade said that in 1885, one Mahant Raghubar Das had filed a law suit seeking permission to construct a Ram temple within the disputed premises.

This plea was rejected by the court then.

Referring to the res judicata principle, the senior lawyer said that now the Hindu parties are barred under the law to re-agitate the same dispute.

"In 1885, a Nirmohi Mahant (Raghubar Das) filed a suit at Faizabad, it got rejected. Then in 1959, Nirmohi Akhara again filed the case. Hence, the suit is hit by res judicata," he said.

The bench then asked whether the entire Hindu community was barred from filing the lawsuit again just because an earlier case was dismissed.

"The 1885 suit did not talk about the 'shebaiti' (rights as devotee) of the Nirmohi Akahara. The earlier issue (of 1885 case) was different," the bench asked.

The issue was whether the earlier lawsuit of 1885 represented the Hindus or not, Naphade said, adding that the Mahant had not filed the case in his individual capacity.

He assailed the HC verdict and said that it had erroneously dismissed the legal submission of Muslim parties on 'res judicata'.

The apex court, which had repeatedly said that it will not extend the deadline of October 18 for conclusion of the arguments, asked Naphade as to how much time he would take.

On being told by Naphade that he would take around two hours more, the bench rose around 12.45 pm saying that the hearing was not going as per the schedule.

Advancing of arguments will recommence on September 30. 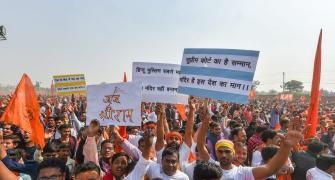