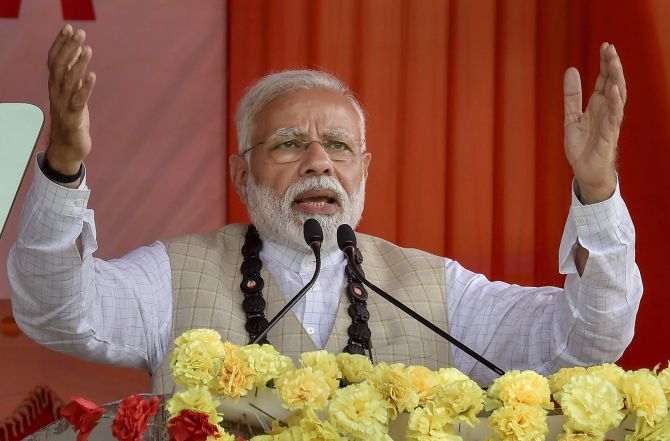 Ahead of the Supreme Court verdict on the Ayodhya issue, Prime Minister Narendra Modi discussed the sensitive matter with his council of ministers in New Delhi on Wednesday and asked them to refrain from making unnecessary statements on the subject and maintain harmony in the country, sources said.

The prime minister made these remarks at a meeting of the council of ministers, while asserting the need to maintain an atmosphere of amity and harmony in the country.

The Supreme Court is likely to deliver its verdict on the emotive Ayodhya issue before Chief Justice of India (CJI) Ranjan Gogoi retires on November 17.

In the latest edition of his 'Mann ki Baat' radio programme on October 27, Modi had recalled how the government, political parties and civil society prevented attempts to create fissures when the Allahabad High Court ruling on the disputed land in Ayodhya was to be delivered in 2010.

He had described it as an example of how a united voice could strengthen the country.

The prime minister told his council of ministers that they should refrain from making unnecessary remarks on the issue and maintain an atmosphere of amity and harmony, the sources told PTI.

He also emphasised that the verdict should not be seen through the prism of victory and defeat, they added.

The remarks of the prime minister came days after the ruling Bharatiya Janata Party asked its workers and spokespersons to refrain from making emotive and provocative statements on the Ram temple issue. The party also told its MPs to visit their constituencies for maintaining calm.

The ruling party's ideological mentor, the Rashtriya Swayamsevak Sangh, issued a similar word of caution to its cadre a few days ago.

The top brass of the Sangh, at its recent meeting of 'pracharaks', had asked them not to celebrate or carry out processions if the Ram temple verdict was in their favour.

Senior RSS and BJP leaders reached out to prominent Muslim clerics and intellectuals on Tuesday and held a meeting with them, during which it was stressed that irrespective of the nature of the court ruling, there should neither be 'junooni jashn' (excessive celebration) nor 'haar ka hungama' (brouhaha over defeat).

The meeting was held at the residence of Union minister Mukhtar Abbas Naqvi in the national capital.

A five-judge Constitution bench, led by the CJI, reserved its verdict in the Ayodhya land dispute case on October 16 after a marathon 40-day hearing.

Jamiat Ulama-i-Hind says will respect SC verdict, appeals to Muslims to abide by it

Exuding confidence that the Supreme Court verdict in the Ayodhya case will be based on 'evidence and not faith', prominent Muslim body Jamiat Ulama-i-Hind on Wednesday said it will respect the top court's ruling in the matter, and also appealed to Muslims to abide by it.

Jamiat chief Syed Arshad Madani, at a press conference, also claimed that its mediation offer that Muslims will give up the claim on the 'Ram Chabutra' provided the Hindu parties give up their claim over the three-dome portion and its courtyard area did not succeed as the Hindu parties, involved in the case, refused to budge, and claimed the entire land, including where the Masjid once stood.

"Be it Ram Lalla or the Nirmohi Akhara, they did not climb down and stuck to their stand. Mediation did not succeed," Madani said.

The Babri masjid case is not mere a case of land dispute but a test case of the supremacy of the law, Madani said.

"We believe SC will decide on the basis of law and not on faith," he said.

"Every justice-loving person wants the case should be adjudicated on the basis of hard facts and evidence not on the basis of faith and belief ," he said, adding that the supreme court also made it amply clear that it is a title suit case only.

The Babri Masjid has always remained as a mosque and is a mosque under the Shariah law and will remain till the day of judgment 'even if the government or any power on the earth tried to change the status of the mosque by using its might', he said.

He said the case is based on historical facts and evidence that the Babri Masjid was constructed without demolishing any temple or any other place of worship.

"Therefore, any individual or organization has no right to surrender the mosque in the hope of getting any alternative," he said.

However, whatever the verdict of the Supreme Court, the Jamiat will respect the ruling, he asserted, while appealing to Muslims to abide by the verdict.

"The debate in the court is over, now we await the judgement. Our lawyer Rajeev Dhawan has made a very strong argument based on facts and we are confident that the decision will be in our favour.

"But, we have said time and again, the country is ours, the law is ours and the Supreme Court is ours. We have given evidence, whatever judgement is made, we will respect it," he said.

"We want to urge all citizens that they should respect the law and maintain peace in the country irrespective of whether the verdict is in favour or against," he said.

Referring to his meeting with RSS chief Mohan Bhagwat in August, Madani said, the basis of that meeting was maintaining Hindu-Muslim unity.

"I am happy that, while sticking to our respective views, we have agreed on the point that Hindu-Muslim unity should be maintained in the country at all times. They (RSS) are also trying for this and we are also trying," he said.

"There has been a change in his (Bhagwat's) statements but we believe our dialogue will continue and will have fruitful result," the Jamiat chief asserted.

Asked about the verdict and the Jamiat's future course of action if it is in favour of the Muslim parties, he said that will be decided after the ruling when all Muslims will sit together.

Jatin Takkar
Source: PTI© Copyright 2021 PTI. All rights reserved. Republication or redistribution of PTI content, including by framing or similar means, is expressly prohibited without the prior written consent.
SHARE THIS STORY
Print this article 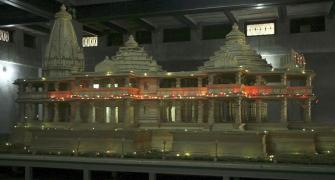