A Rajasthan police team was on Friday evening stopped for some time by the Haryana police from entering a hotel in Gurgaon where some dissident Congress MLAs are said to be holed up, an official said. 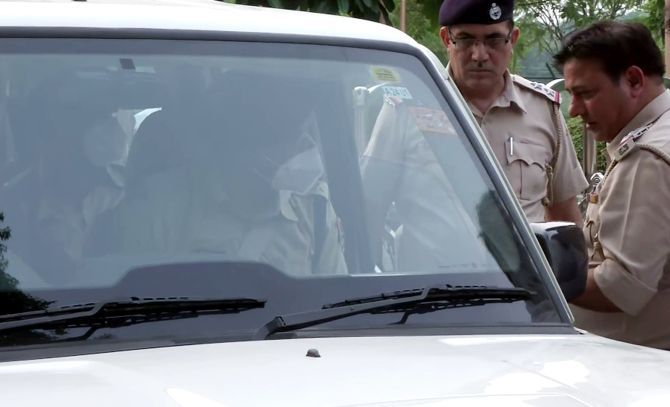 IMAGE: Haryana police interact with a team of Special Operations Group of Rajasthan Police arriving at the resort where Congress MLAs are staying, in Manesar. Photograph: ANI Photo

A Special Operations Group team went to Manesar in Gurgaon to question MLA Bhanwarlal Sharma, as part of its investigation into two audio clips which allegedly indicate a plot to bring down the Congress government in Haryana.

But the FIR registered by the Special Operations Group does not identify one 'Gajendra Singh' as any minister.

Television channels showed a Rajasthan police vehicle being stopped outside the Manesar hotel for nearly an hour by policemen from the BJP-ruled state.

The police vehicle was later seen entering the hotel compound and then being driven out after several minutes.

Additional Director General (SOG) Ashok Rathore said the team was told at the reception that the MLA was not there. The police then left the second hotel in Manesar where some of the MLAs led by rebel Congress leader Sachin Pilot are said to camping. 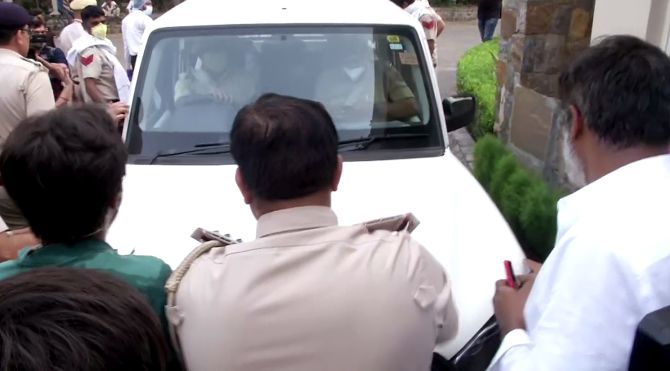 IMAGE: A team of Special Operations Group of Rajasthan Police arrives at the resort where Congress MLAs are staying, in Manesar. Photograph: ANI Photo

"A team was sent to Manesar to ascertain the versions of those whose names have come up in audio clips as there have been statements that these audio clips are fake or morphed," Rathore had said earlier.

The refusal to allow the team, at least initially, to enter the hotel, prompted senior Congress leaders to charge that the BJP was part of the plan to 'topple' their government in Rajasthan.

"If BJP claims not being involved in Congress's internal fight, then why BJP-led Haryana government is extending their support and protection to MLAs inside the hotel?" AICC general secretary Avinash Pande tweeted.

"Haryana Police blocking Rajasthan Police from investigating the 'toppling game' is naked proof of this plot," he tweeted. He claimed that the BJP "collusion" in the "plot" has now been exposed.

In separate statements, Union minister Shekhawat and MLA Bhanwarlal Sharma has rejected the charge that they figured in the audio clips. 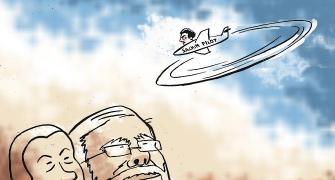