Amid people's protests against alleged encroachment of Assam land by Naga people at Merapani area in Golaghat district violating the status quo agreement between the two governments over the disputed boundary,Nagaland Armed Police on Thursday removed the 'controversial' makeshift camp it had set up at Merapani area recently on request from Assam government.

A senior official of Golaghat district in Assam informed that the NAP camp was removed on Thursday at around 11.30 am, and the situation was now normal in the area

"Some people with vested interests tried to blow up the issue to create tension and confusion among people living in inter-state border area in Merapani," he said.

He said there had not been any encroachment of Assam land by Naga people in the area as alleged by certain quarters.

Assam Chief Mminister Tarun Gogoi on Wednesday on the basis of reports received from his officers also claimed that there was no encroachment on Assam land barring a 'temporary looking' post set up Nagaland Armed Police in the area.

He said, "We have requested the Nagaland government to remove the NAP post and that is likely to be done by Thursday."

However, the chief minister's comment sparked angry reaction from public leaders in Merapani which criticised him of being unaware of ground realities in the area where Naga people were out to grab Assam's land while the neutral Central Reserve Police Force personnel deployed in the area choose to remain mute spectators.

The people alleged the encroachment bid was backed not only by Nagaland government and police but also by Naga rebels in truce. The situation in the area was tense since August 17 last when some miscreants set afire the house of one Miraz Ali at Upper Merapani area.

The administration in Golaghat district deputy claims that that was an isolated incident which has been blown out of proportion by vested interests.

Meanwhile, the pro-talks faction of United Liberation Front of Assam led by its chairman Arabinda Rajkhowa who was on a visit to Merapani on Wednesday, promised that ULFA group would raise the issue of boundary dispute and alleged encroachment of Assam area in the next round of talks with the Central government.
K Anurag in Guwahati
Related News: Assam, Nagaland Armed Police, Naga, Upper Merapani, Mminister Tarun Gogoi
Print this article
Assam: Govt to sign ceasefire pact with ULFA
Gogoi urges Paresh Barua to join peace process 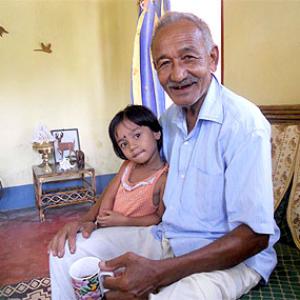