The flood situation in Assam continued to be grim with four more deaths in different areas of the state taking the toll to 35 even as the water level in some of the rivers have started receding, official sources said.

A mahout died after he was attacked by a wild elephant in the flood waters on Saturday morning in the Kaziranga National Park, which has been completely inundated by the water of river Brahmaputra.

In Cachar district, a teenager drowned on Saturday morning, the sources said.

Stating 173 relief camps have so far been set up for the succour of the flood victims, the sources said, the deluge has destroyed standing crops in over 43,400 hectares.

Congress President and UPA chairperson Sonia Gandhi is likely to visit the state soon to take stock of the latest flood situation.

Assam Pradesh Congress Committee president Bhubaneshwar Kalita, who met Gandhi at New Delhi on Thursday, said he briefed Gandhi about the latest situation and she expressed the desire to visit the state soon.

Over one lakh people in Majuli have taken shelter on embankments. A 10-member team of doctors from Jorhat have left for Majuli, which has been cut-off from the rest of the world for the last three days after ferry services to Nimatighat were suspended.

A CRPF camp in the island was evacuated after water threatened Majuli with several Satras (Vaishnative monasteries) coming under water.

A heard of elephants have taken shelter on sand banks in the north-eastern side of the island.

In Jorhat, over hundred villages remained under water in Nimatighat, Janjimukh and other areas. State PWD minister Ajanta Neog visited the places on Saturday.

In Dibrugarh, villages in Rohmoria and Chabua remained inundated, while the worst affected Dhemaji and Lakhimpur districts, large areas in Jonai, Dhakuwakhana and Machkhowa among others continuing to reel under the swirling flood waters.

The situation in central Assam's Morigaon and Nagaon districts, where the Brahmaputra and its tributaries Kolong, Kapili and Kiling are showing a steady trend, also remained grave.

In Kaziranga, wild elephants and rhinos fleeing from the rising water have created panic on the National Highway 37 and nearby villages.

In south Assam's Barak Valley, parts of Lakhipur and several nearby villages have been flooded. More than 30,000 inhabitants of these areas have been shifted to safer places for shelter, the sources said.

Flood situation in the Katigorah constituency of Cachar, bordering Bangladesh, shows some signs of improvement with the receding level of Surma, Baleswar and Gumra rivers.

A report from the border area says the BSF camp at Pirnagar has been inundated by Surma forcing the jawans to shift.

While Brahmaputra in many places continued its rising trend, other rivers have started receding in some places. including the Subansiri in Bodotighat, the Dikhow in Sibsagar, Desang in Nanglamuraghat and the Dhansiri in Golaghat. 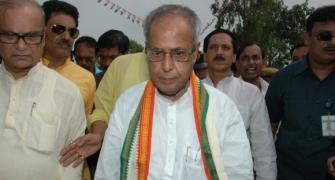 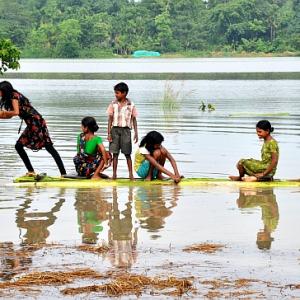 PM's "reforms team" back with a bang!