After Hathras, woman dies after gang-rape in UP's Balrampur

A 22-year-old Dalit woman died after allegedly being raped by two men in Uttar Pradesh's Balrampur district, succumbing to critical injuries on the same day as the teen from Hathras in the state who breathed her last in a Delhi hospital two weeks after she was gang-raped. 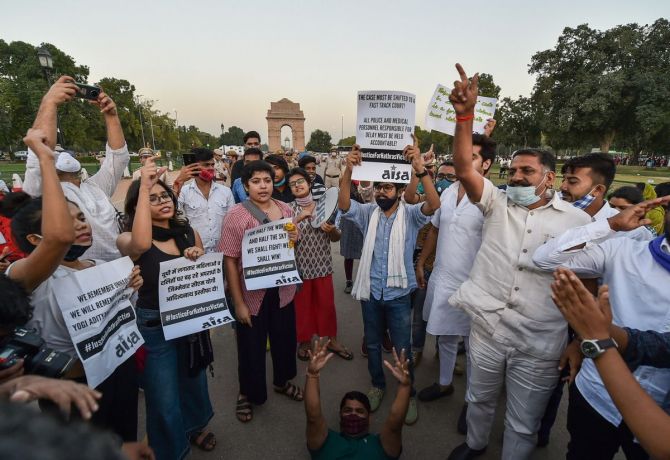 IMAGE: Members of All India Students Association (AISA) and Bhim Army detained by police during a protest against the death of a Dalit woman who was gang-raped in Hathras (UP), in New Delhi, on Wednesday. Photograph: Arun Sharma/PTI Photo

Both the women died on Tuesday and were cremated on Wednesday.

The two men accused of assaulting the woman from Balrampur have been arrested, police said amid outrage over the death of the 19-year-old Dalit woman from Hathras.

The Balrampur victim's mother told reporters on Wednesday night that the rapists broke her daughter's legs and back, a charge denied by the police.

"My daughter had gone to take admission in a college on Tuesday. On her way back, three-four persons abducted her, took her to their room, gave her an injection and raped her.

"They later sent her back on an e-rickshaw, which dumped her outside our house. They broke her legs and back. She could not stand or talk," the woman said.

Quoting the victim's family members, Balrampur Superintendent of Police (SP) Dev Ranjan Verma said the woman worked in a private firm and returned home on Tuesday in a serious condition.

She looked dazed and had a cannula, medically known as Vigo and used for administering an injection or other fluids in the body, inserted in her hands.

She was rushed to a nearby hospital but died on the way, the SP said.

When the matter was reported to the police by the hospital, her parents alleged she was gangraped, he added.

Acting on the family's complaint, police identified the accused as Shahid and Sahil and arrested them.

About the mother's allegation that the woman's legs and back were broken, Verma said, "It was not confirmed in the post-mortem. We contradict this news."

She was cremated on Wednesday after the post-mortem in the presence of her family members, the police said.

The district magistrate and the SP, along with the mahant of the Devipatan temple, Mithilesh Nath Yogi, visited her home on Thursday morning, met the family members and condoled her death.

'The family members were assured that the accused will be given a strict punishment in accordance with law. A letter sanctioning a financial assistance of Rs 6,18,450 was handed over to them by the mahant.

'The amount will be sent to the victim's mother's bank account by the afternoon,' a statement issued in Balrampur said.

The mother has demanded a compensation of Rs 25 lakh and a government job for her son.

'My daughter wanted to become a lawyer but she was killed. The same fate should await the culprits. We want justice. My son should be given a government job and we should get at least Rs 25 lakh as compensation,' she said.

News of her death and cremation came as people were still coming to terms with the details of the Hathras incident, where the 19-year-old was cremated in the dead of the night near her village on Wednesday with the family alleging that they were forced to hurriedly conduct the last rites.

She died in Delhi's Safdarjung Hospital on Tuesday.

The 'jungle raj' that has spread in Uttar Pradesh has no limits and the time for accountability is now, Congress general secretary Priyanka Gandhi Vadra said, adding that a gruesome incident like Hathras had taken place in Balrampur too.

'Law and order is not run by marketing and speeches. This is time for accountability of the Uttar Pradesh chief minister. The public wants accountability,' Priyanka Gandhi said in a tweet in Hindi.

Alleging that 'atrocities' on women and the government's brazenness is continuing, former Congress president Rahul Gandhi said, 'Did not give respect when alive and also snatched the dignity in death.'

His tweet, also in Hindi, referenced the Hathras victim's family being allegedly denied the right to properly perform her last rites.

'After Hathras, now a daughter was harassed and gangraped in Balrampur. The victim died in serious condition. Condolences!' Samajwadi Party (SP) chief Akhilesh Yadav wrote on his Twitter handle on Wednesday night:

'The BJP government should commit no laxity in this case as was done in Hathras and arrest the accused immediately,' he added with hashtags #Balrampur and #NoMoreBJP.

In the Hathras case, the Dalit woman was allegedly raped by four upper-caste men in Hathras on September 14 and referred to the Safdarjung hospital in Delhi on Monday with spinal cord injuries, paralysis and cuts in her tongue.

She died around 3 am on Tuesday. 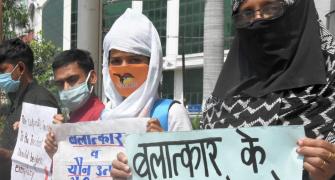 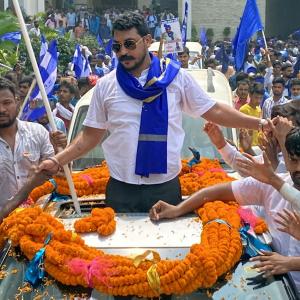 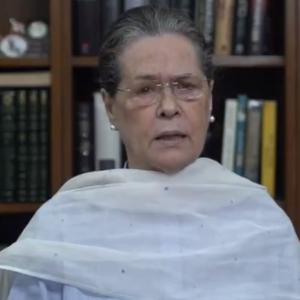