In a scathing attack on the Yogi Adityanath dispensation in Uttar Pradesh over the Hathras gangrape incident, Congress president Sonia Gandhi on Wednesday said the victim was "killed by a ruthless government", its administration and its ignorance. 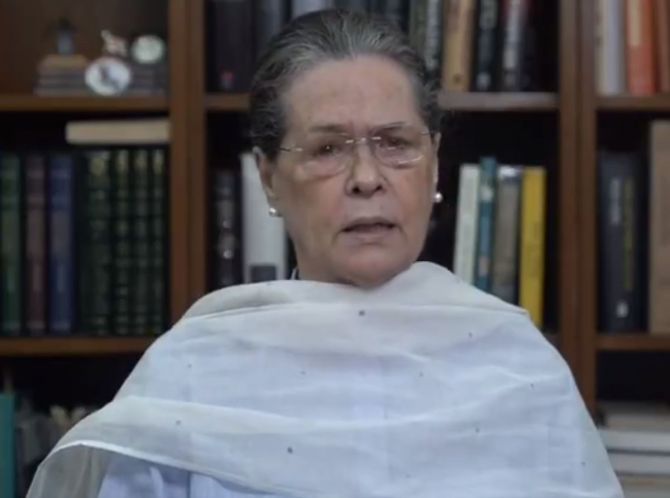 The 19-year-old Dalit woman, who died in a Delhi hospital a fortnight after she was gangraped in Uttar Pradesh's Hathras, was cremated in the early hours of Wednesday.

Her family alleged the local police forced them to conduct the last rites in the dead of the night.

However, local police officers told PTI that the cremation was carried out "as per the wishes of the family".

In a video statement posted on the Congress' official Twitter handle, Gandhi said crores of people were sad and angry and the "demoniac behaviour that Hathras' daughter had to suffer is a blot on our society".

Asking if it was a crime to be a poor person's daughter, Gandhi questioned the Yogi Adityanath government in the state as to why "the cry for justice" of the victim's family was not heard for weeks.

"There was an attempt to hush up the matter. The girl was not given timely treatment and a daughter is no more amongst us. I want to say that Hathras' Nirbhaya has not died, she has been killed -- by a ruthless government, by its administration and by the UP government's ignorance," the Congress chief said.

"When she was alive, she was not heard, she was not protected, and after her death she was also deprived of her home's soil. She was not handed over to her family and a crying mother was not even given the chance to bid final adieu to her daughter. This is a big sin," Gandhi said.

She alleged that the woman's body was cremated "forcibly".

Even in death there is a person's dignity and the Hindu religion talks about that as well, she said.

"But that girl was cremated like orphans by using the force of the police. What kind of justice is this, what kind of a government is this. You think that you can do anything and the country will just keep looking. No, the country will speak out against your injustice," Gandhi said.

"From the Congress party, I demand justice for the Hathras victim. India is a country for all and everyone has the right to live with dignity. The Constitution has given us this right. We will not allow the BJP to break the country and the Constitution," she asserted.

Former Congress chief Rahul Gandhi, in a tweet, said, "A daughter of India is raped-murdered, facts are suppressed and in the end, the right to perform the last rites is also taken away from the victim's family."

"It is insulting and unjust," he said in the tweet in Hindi using the hashtag 'Hathras Horror Shocks India'.

Rahul Gandhi also tagged a video purportedly of the cremation site showing a police officer not answering queries on whether the body of the victim was being cremated there.

Tagging a report on the cremation in another tweet in Hindi, he said, "This is a shameful move of the UP government to suppress Dalits and show them their 'place' in the society."

The Congress' fight is against this "disgusting" thinking, he said.

Congress General Secretary Priyanka Gandhi said, "I was on the phone with the Hathras victim's father when he was informed that his daughter had passed away. I heard him cry out in despair."

"He had just been telling me that all he wanted was justice for his child. Last night the victim's father was robbed of the chance to take his daughter home for the last time and perform her last rites," she said in a series of tweets.

Tagging Adityanath, she tweeted, "RESIGN. Instead of protecting the victim and her family, your government became complicit in depriving her of every single human right, even in death. You have no moral right to continue as chief minister."

In another tweet in Hindi, she alleged that at 2:30 am Wednesday the "victim's kin kept requesting", but the UP administration "forcibly" cremated the deceased.

She was relentless in her attack on the chief minister.

At a press briefing, Mahila Congress chief Sushmita Dev said there must be an inquiry into the whole incident, but the subject matter of the inquiry must go beyond the activities of the rapists.

There should be an inquiry into the "gross and criminal negligence" of the UP chief minister, who is also the home minister of the state, Dev said.

"The way the cremation was carried out at 2:30 AM in an unjust manner, to give justice, the only answer is that the prime minister should ask for UP CM's resignation. If the PM does not do so, then there will be no justice to her," Dev said.

On a Special Investigation Team formed by the UP government to probe the matter, Dev wondered if the SIT has the power to call the CM.

Dev also attacked BJP MP Smriti Irani for not speaking out on the issue and said she would go down in history as the "worst women and child development minister".

Irani should resign as an MP of Lok Sabha given the state of crime and women security in UP, Dev said.

On September 14, the young woman had gone to the fields with her mother and went missing soon after. She was found later, beaten and tortured, her tongue cut as she bit it when the accused attempted to strangle her. 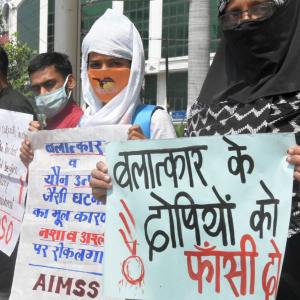