"I am not stuck with Fevicol with the NDA. Today, I separate myself from the NDA," Beniwal said at a farmers' rally at Shahjahanpur in Alwar district after starting a march to Delhi in support of the farmers who have been protesting against the contentious laws.

In September, the Shiromani Akali Dal (SAD) had quit the NDA over the three farms laws. Thousands of farmers, mostly from Punjab and Haryana, have been camping on Delhi's borders since November 26, demanding a repeal of these laws.

Beniwal was elected as BJP MLA in Rajasthan for the first time in 2008 but later left the party.

The RLP leader said that farmers were running the agitation in the country and he was not trying to gain political mileage with his action.

He had resigned from three parliamentary committees last week in support of farmers' agitation.

"Farmers are peacefully carrying out their protest. I request them to protest peacefully. If farmers are cane-charged, then we will forcibly march towards Delhi," Beniwal, a three-time MLA, said.

Farmers from Rajasthan have been protesting in Shahjhanpur near the Rajasthan-Haryana border on the Jaipur-Delhi highway for 14 days.

Farmers on Saturday blocked two-way traffic on Jaipur-Delhi national highway, which was partially blocked until now.

The police administration has diverted heavy vehicle traffic on the highway from the Paota-Bansur route and light four-wheelers from the Behror-Khairthal route to avoid inconvenience to passengers.

"Highway has been blocked on both sides today. Traffic from Delhi has been diverted from Bhiwadi-Dharuheda. Ample arrangements have been made for smooth traffic transition on the diverted route," Alwar SP Tejaswini Gautam said.

However, the protesting farmers have expressed apprehension that these laws would pave the way for eliminating the safety cushion of the MSP and do away with the "mandi" (wholesale market) system, leaving them at the mercy of big corporates.

The government has repeatedly maintained that the MSP and mandi systems will continue. It has also offered to amend the laws and provide a written assurance on the issue of MSP, but the proposal was rejected by farmer unions.

The sixth round of talks between the Centre and the farmer unions on December 9 was cancelled.

Prime Minister Narendra Modi had on Friday squarely blamed those with a political agenda for the deadlock and asserted that his government was willing to hold dialogue with all, including those staunchly opposed to it, as long as the talks are based on farm issues, facts and logic.

The protesting farmer unions on Saturday decided to resume their dialogue with the government and have proposed the next round of talks on December 29. Farmers ready to resume talks with govt on Dec 29 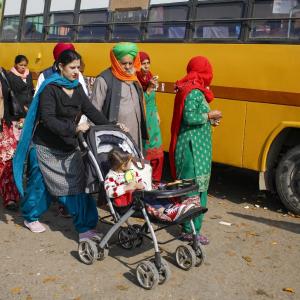