News
Business
Movies
Sports
Cricket
Get Ahead
Money Tips
Shopping
Sign in  |  Create a Rediffmail account
Rediff.com  » News » Why the police can't pin anything on Ansari and Sabahuddin

Why the police can't pin anything on Ansari and Sabahuddin

On Monday, special public prosecutor Ujwal Nikam said that he would be recommending the state to initiate appeal against the acquittal of Fahim Ansari and Sabahuddin Ahmed before the Supreme Court. It is easier said than done as the high court has doled out a watertight judgment with detailed reasoning and explanations that derives its guiding principle from as many six judgments of the Supreme Court.

Special Public Prosecutor Nikam said that the court did not refute the charges against Fahim Ansari and Sabauddin Ahmed, however it could not overturn the acquittal of the lower court for want of corroborative evidence. Corroborative evidences are relied upon to overcome the shortcomings in the prime evidence that is presented by the prosecution to prove its case.

In Ansari's case though the prosecution is able to establish that he had fraudulently posed as Sahil Pawaskar and enrolled in a computer institute in Mumbai, the moot point of his handing over maps to Ahmed in Nepal thereby linking him to the 26/11 conspirators could not be established.

The case against Fahim Ansari and Sabauddin Ahmed

Fahim Ansari and Sabauddin Ahmed were first arrested by the Uttar Pradesh police for their involvement in an attack on Central Police Reserve Force camp in 2008 were handed over to the Mumbai police in January 2009. The Mumbai police had sought the custody of the duo after UP police had found on them a rudimentary map of the places targeted by the terrorists during the 26/11 attack.

According to Mumbai Police, Ansari a resident of Goregoan ( a northern suburb) in Mumbai had visited Nepal in January 2008 and handed over the map to Ahmed who in turn took it to the 26/11 masterminds in Pakistan. The Mumbai Police claimed that the similar map was found on Abu Ismail,  Kasab's partner, who was killed at Chowpatty.

Evidence against Fahim Ansari and Sabauddin

The Mumbai police produced before the court a person identified as Naruddin Shaikh who claimed to be a friend of Ansari. Shaikh spots Ansari in Kathmandu, who takes him to his hotel. There Ahmed comes to visit Ansari, who then hands Ahmed some papers. While changing hands, the paper falls and Shaikh sees the map. When questioned by Shaikh Ansari tells him that the maps are for his friends from Pakistan who would be visiting India. The police had also managed to track down the estate agent and landlady in Mumbai where Ansari stayed during his reconnaissance of target locations. The computer institute where he had enrolled as Sahil Pawaskar has also been established.

Why court did not buy prosecution's case against Ansari and Ahmed?

The high court agreed with the conclusions of the sessions court that prosecution failed to prove how Shaikh who is a driver and does not have any regular source of income had undertaken a trip to Nepal. "It is not the case of the prosecution that Bharat Thakur with whom he (Shaikh) is supposed to have gone to Nepal had borne the expenses of his visit to Nepal," the high court observed in its judgment that runs into 1208 pages.

The entire case against Ansari and Ahmed rests on the grounds that Shaikh had visited Nepal and witnessed the former hand over maps to Ahmed. However the prosecution were not able to prove that Shaikh had indeed gone to Nepal in the first place and thus putting to doubt of his witnessing the map exchanging hands of the two accused.

This star witness of the prosecution was not able to remember any timing, dates or the train or the hotel where he is supposed to have stayed.

"He does not appear to be a person who can afford to go on pleasure trips to foreign countries frequently. Therefore, in the nature of things, one would expect him to remember the name of the train by which he traveled to Nepal and the name of the hotel where, he says, he stayed. He has not even given the approximate time when he went to Nepal. The argument that Shaikh did not remember these particulars is not palatable because, normally a person who visits a foreign country that too, for the first time, would not forget details of the train by which he traveled or the name of the hotel in which he stayed," observed the high court in its order.

Observing that the prosecution did not make any efforts to record the evidence of Thakur, who had accompanied Shaikh to Nepal, the court remarked that "If Shaikh's evidence was of sterling quality, we would not have insisted on examination of Thakur." With prosecution not being establish that Shaikh had indeed visited Nepal its case that he had witnessed Ansari giving maps to Ahmed collapses. "In fact, once we hold that Shaikh's evidence is not corroborated and, therefore, the prosecution case about the exchange of maps in Kathmandu, Nepal cannot be accepted, Shaikh cannot be convicted in this case. As held by learned Sessions Judge, Ansari and Ahmed must get the benefit of doubt," the court said in its order.

As far the map which was claimed to have been recovered from the pocket of slain terrorist Abu Ismail, the high court concurred with the session court observation that Ismail who is alleged to have carried the map in his right pocket of his cargo pant ought to have wrinkles as it was on a thin piece of paper. The map that had been produced before the court as evidence was wrinkle free and without any bloodstains though the pocket in which he had allegedly carried the map had stains on it. Thus the court agreed with the session court that the map that links Ansari and Ahmed to the 26/11 conspirators could not have been found on Ismail. 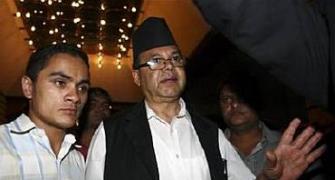 The road Buddha's mother traversed is no more