The two discussed the expansion of the state cabinet, the ordinance on micro-finance institutions, trimming the administration and preparing for political developments after the Justice Sri Krishna Committee submits its report on the creation of Telangana state.

According to sources, Gandhi heard out Narasimha's concerns about the state administration and assured him that she will take prompt political action. 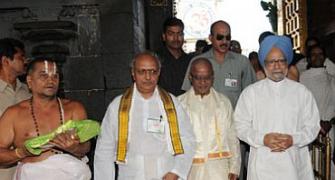