As many as 21 people have been arrested in connection with the clashes between Aligarh Muslim University students and police over the Citizenship Amendment Act and orders issued to completely vacate all hostels of the university, officials said on Monday. 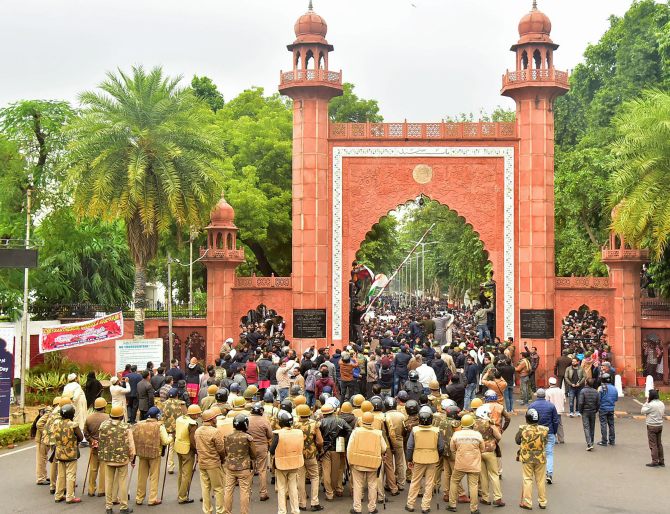 "We have arrested 21 persons in the matter. Named FIR has been lodged against 56 persons and others unidentified," said SSP (Aligarh) Akash Kulhary.

AMU Proctor Afifullah khan said no student will be allowed to remain in the hostels as strict orders have been issued to vacate all hostels completely.

Special arrangements have been made to evacuate the students from these hostels and about 40 buses arranged to ferry them to their home towns in the western districts, ADG (Agra) Ajay Anand said.

Arrangements have also been made for all long-distance trains travelling to the eastern and north-eastern states of the country, with no stoppage in Aligarh, to halt here to enable students of these areas to leave for their homes, the officials said.

UP Director General of Police O P Singh said Internet services in Aligarh, Saharanpur and Meerut have been suspended.

Protests broke out on Sunday night against the amended citizenship law, with hundreds of AMU students clashing with the police at a campus gate, leading to the university adminstration announcing closure of the institution till January 5.

Patrolling was intensified in the city following Sunday's incidents and an uneasy calm prevailed on the AMU campus.

Around 70 people, including students, 20 police personnel and AMU security guards, were injured in the clashes.

Among those injured in the violence are Aligarh DIG Parminder Singh and SP (City) Abhishek.

In a statement, he said this measure had to be taken following reports that some mischievous elements were sharing incriminatory posts which could threaten law and order.

All schools and colleges have been closed as a precautionary measure, SP (City) Abhishek said, adding that police pickets and a magistrate have been posted at all entry points to the university campus. 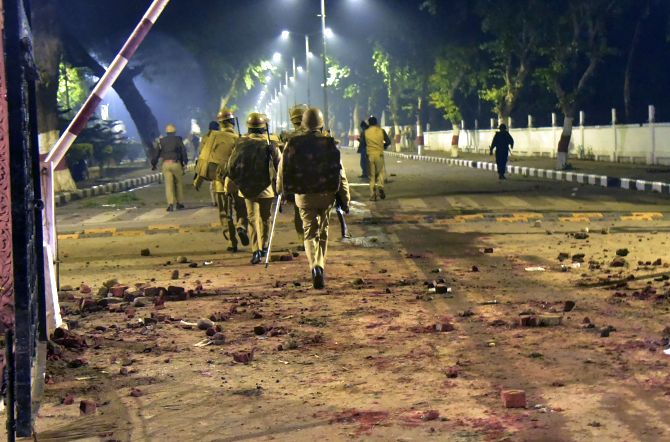 Police said all business establishments in the neighbouring market areas of the university, like Jamalpur, have kept their shutters down. Markets in the old city, including the sensitive Upper Fort area, are also closed.

The clashes at AMU started after an agitation by Jamia Millia Islamia students in Delhi against the Citizenship Amendment Act turned violent and police used batons and tear gas to disperse them.

The situation is normal in the campus, the SSP said.

Meanwhile, in an official statement regarding the sequence of events leading to Sunday's clashes on the AMU campus,
Professor Shafey Kidwai said, "Peaceful democratic protests against the CAA were being held in the campus since the past few
days.

"However on Sunday evening, an atmosphere of unrest started enveloping the campus following the violence at Jamia Millia Islamia, New Delhi," he said.

"As tempers ran high, a group of lumpen elements, yet to be identified, started instigating the protesters and this resulted in a very difficult situation which threatened to go out of control and could have led to loss of precious lives of innocent students," Kidwai said, adding that under such circumstances, the university declared a winter vacation from December 16 to January 5.

According to a eye witness who requested anonymity, "Around 7.30 pm, social messages circulated throughout the campus calling for a general body meeting of students at the university library."

"These messages were not sent by leaders of the students' union but by some unidentified sources," he said, adding that at the library, students raised the issue of Jamia violence and decided to hold a protest near Bab-e-Sayed gate inside the campus."

"Some youths wearing masks tried to instigate the students by raising emotive slogans and urged them to move to the gate in large numbers. Shortly after, a clash broke out and police entered the campus," he said.

Another student, belonging to the Morrison Court hostel, whose brother was reportedly picked up from a hostel room around 11 pm, said, "A group of policemen forced their way inside the hostel after beating up the security guard, lobbed teargas shell by breaking the window pane of room no 46. which was engulfed in smoke."

"My brother and three others who were present had to flee and were then picked up by the police, thrashed and taken away," he said, and urged the university authorities to trace their whereabouts.

When contacted, the general warden of the hostel, Dr Mohammad Talha confirmed the incident and said, "We have apprised the university administration of what took place in the hostel and our concern for the whereabouts of those who were picked up by the police."

AMU Registrar Abdul Hameed said the university was in touch with the district authorities to trace the students reportedly picked up for questioning.

"We are hopeful of allaying the apprehensions of the students on this count," he said.