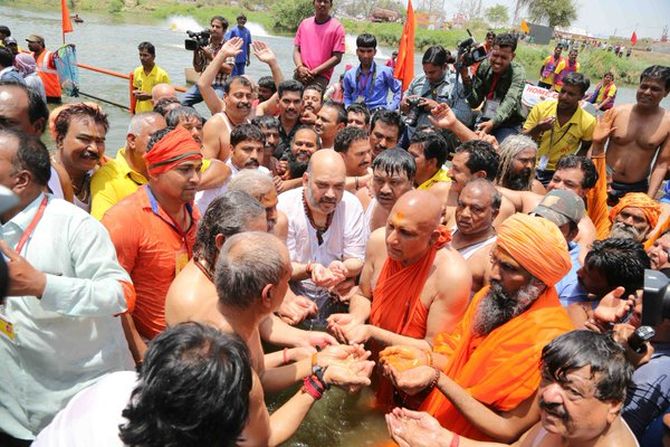 Bharatiya Janata Party President Amit Shah along with Dalit sadhus and others on Wednesday took a holy dip at the ongoing Kumbh Mela in Ujjain as part of the 'Samrasta Snan' (social harmony bath) at the Valmiki Ghat (bank) of Shipra river, overcoming reservations from certain quarters.

Shah arrived in Ujjain from Indore to take part in the month-long Simhastha Kumbh and joined the Dalit sadhus and other saints in the holy bath billed by the Bharatiya Janata Party as the 'Samrasta Snan' with an eye on the assembly elections in the politically sensitive Uttar Pradesh next year.

The 'Samrasta Snan' comes at a time when the Rashtriya Swayamsevak Sangh is organising a series of functions to draw Dalits and tribals into its fold in the wake of the backlash caused by its chief Mohan Bhagwat's statement calling for review of the reservation policy before the Bihar Assembly polls last year.

Prior to the 'Snan', the BJP chief accompanied by Madhya Pradesh Chief Minister Shivraj Singh Chouhan and others took part in a "samagam" (meeting) at Valmiki Dham in which Akhil Bharatiya Akhara Parishad head Narendra Giri, Juna Akhara Peeth's head Awdheshanand and Valmiki Dham's Peethadheeshwar Umesh Nath among others participated.

Later, they all proceeded to take a dip at the Valmiki Ghat. "The BJP is the only party which believes in strengthening the country's culture and fosters the feeling of world as one abode, one family (Vasudevkutumbhkam)," Shah told reporters.

"It (snan) holds more significance as today is the jayanti of Shankracharya, who treaded the path of unifying the main currents of thoughts in Hindu religion at a young age of 32," he said.

Kumbh is also the subject matter for management students as crores of people converge here without any invitation, he added.

The sadhus who were earlier averse to the 'social harmony bath' on Wednesday softened their stand saying they had misunderstood the concept.

They said they were under a wrong impression that the snan was confined to Shah and the Dalits. After learning that the bath will see people from all castes, they said they no longer hold any grudge against it.

"Water is for everybody and saints of all hues have taken bath together. We have no reservation now against the snan," Juna Akhara Peeth's head Awdheshanand said.

Valmiki Dham's head Umesh Nath Maharaj appealed to political parties and saints to propagate nationalism above caste, sect and community, a line of thought being vigorously and vociferously being pursued by the BJP.

Earlier, the Shankaracharya of Dwarkapeeth Swaroopanand Saraswati and Akhil Bharatiya Akahara Parishad president Narendra Giri had deplored the move, saying the sadhus have no caste and all were free to take a holy dip during Kumbh.

There were media reports that Shah may skip the 'Samrasta Snan' after senior RSS leader and Bharatiya Kisan Sangh vice president Prabhakar Kelkar said on Sunday the announcement of social harmony bath gave an impression that earlier Dalits were discriminated against during Kumbh.

With Narendra Modi and Amit Shah at the helm of affairs in the government and the party, BJP has made no bones about its attempts to broaden and consolidate its core Hindutva vote bank with the help of religious leaders and events.

Dalits, who have been mostly wary of embracing the Hindutva agenda, are being aggressively wooed by the party. The BJP has of late vigrously promoted the legacy of Dalit icon B R Ambedkar as it believes that the disadvantaged community's support held the key to its future.

The party's immediate priority is the UP Assembly polls scheduled next year and the Dalits, who constitute over 20 per cent of the state's population, are currently seen to be backing Mayawati-led Bahujan Samaj Party. 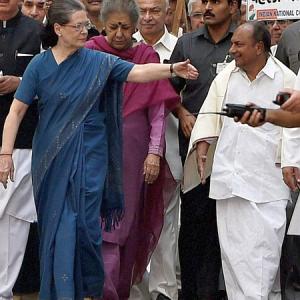